Balmoral Resources' drilling keeps discovering new zones of gold mineralization at the Martiniere property in Quebec, says CEO Darin Wagner, and he expects the trend to continue with the summer drill program just getting underway.

Management Q&A: View From the Top

The Gold Report: Darin, it's a pleasure to have you with us. Would you bring us up to date on what's happening at Balmoral Resources Ltd.'s (BAR:TSX; BALMF:OTCQX) Bug South deposit in Quebec?

Darin Wagner: We are just getting started on the summer drill program along the Bug Lake Trend and waiting for the last few holes from the spring program. Bug South is one of four deposits in a tight little cluster on the Martiniere property. All of the deposits have high-grade cores with results commonly in the quarter-ounce range. And all the deposits are open and the summer program will look to continue to grow them.

Bug South was a 2016 discovery. We spent the better part of the last nine months drilling it. We've chased it down to about 400 meters below surface. And it remains open below that depth.

The summer program has a dual-focus, both infill drilling on the Bug Lake deposits to get them ready for their debutthe initial resourceand also continuing to grow them, which is obviously key to shareholders, the continued growth of the system out there.

TGR: Your drilling at Bug South is following the deposit down plunge. What drilling do you have planned for continuing exploration?

DW: We would expect to see around 25,000 meters drilled out over the summer/fall, with the bulk of it being on that Martiniere property and a good chunk of it obviously on that expanding Bug South deposit.

We've moved into "underground" depths, so we're chasing that high-grade core of the deposit down to depth, letting it lead us where it's going to take us over the next few months, with the objective of having most of the area between surface and about 500m vertical depth drilled out as we head into the fall. That will form the basis for our next update on the project. At the same time, we'll be working on some of the other components of that bigger system, the other deposits that are close by and a series of new high-grade gold discoveries.

TGR: When would you expect to start having some results back from the lab?

DW: We usually try and batch up a series of related holes. So, if we have 6 to 10 holes that are specific to Bug South, we'll batch those up. We still have about 10 holes left over from the spring program that we'll release in fairly short order, sometime in the next couple of weeks.

Once the drills have started to turn, every six weeks or so after that we will release results. It depends on the workflow through the lab. But usually every six weeks or so you'll get an update on how the drilling is progressing, get a look at how the deposits are growing and be able to evaluate how we're doing on the project. The news flow, starting late June/early July, should be pretty steady through the summer and well into the fall. Typically, the last results from the summer program will come out in late November/early December because we'll drill through into October. Expect a pretty constant news flow for the balance of the year coming off the projects in Quebec.

TGR: Why don't you update us on Bug North?

DW: The Bug system is three depositsBug South, which is the newest of the discoveries; Bug North; and what we call the Lower Steep. Bug North tracks down underground and ends up effectively underneath the Bug South deposit. So we've actually drilled it a little deeper. We're down to about 450 meters on Bug North and about 550 meters on the Lower Steep. So, these three deposits are all walking in tandem down to depth and growing alongside each other.

We'll do a bit more drilling on the area between surface and 500m on Bug North this summer and then continue the progression of walking it to depth. 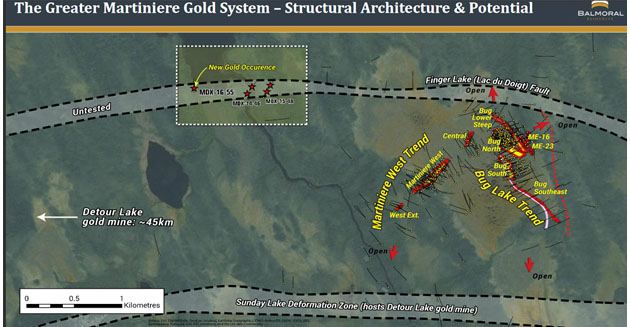 TGR: Would you tell us about some of the other areas on the property, such as Horsefly and the 237 zone?

DW: One of the neat things about the property is that on every program we've run to date, we have found new zones of gold mineralization. So the system itself outside of the deposits is showing considerable size and scale. We continue to add new discoveries, and the Horsefly and the 237 are two of the newest ones. Those were both discovered last fall.

The follow-up on the Horsefly has shown results very similar to what we see along Bug, a high-grade core 510 meters in the 510 gram range and then a broader halo of lower-grade mineralization around there out to about 20 meters wide. So, there is good potential for ounces in that system.

So far, Horsefly has a total of four holes in it, so it's literally open in every direction. And certainly, one of the early parts of the drill program this summer will be on Horsefly, followed quickly by more holes in the 237 area as well.

This is one of the things we really like about Martiniere. The whole system continues to expand. Every time we're out there with a program, we step into new areas and we make new discoveries. That's the hallmark of a strong and large gold system.

TGR: Balmoral also has Grasset and the broader Detour Trend project. What's going on there?

DW: The main focus will remain on growing the known deposits at Martiniere, but at the same time, we don't want to ignore the fact that we have 1,000 square kilometers of very prospective ground. That includes Grasset, which is a nickel-copper-cobalt-platinum group elements deposit, and then several related occurrences nearby.

Because of the soft state of the nickel market, we're not doing a lot on those at the moment. But they do provide free carried exposure to that market.

On the broader project, though, we will be very active, in particular on a piece of ground we call Detour East, which is right across the border from the giant Detour gold in Ontario. That will be a focus on the exploration side of the summer program; you will probably see 10-20 holes drilled on that property with half following up on known gold mineralization and testing a series of exciting new target areas all within sight of the daily blasts at one of Canada's largest gold mines.

So it mainly will be gold-focused work this summer. But every once in a while, you get a surprise, too, which is the joy of doing exploration.

TGR: Are there other catalysts besides the price of the metals going through the roof?

DW: I think the big catalysts for us, both in the past and in the near term, have come from sizable additions to what we're doing on the deposits or from new discoveries. We pride ourselves on being a discovery-focused company, and we've been able to make a series of them up on the project. Outside of that, we're always looking at new opportunities and new ideas. Once every few months we introduce one of those to the shareholders.

So, I think those are the big ones to watch forlater in the year, the update on the numbers at Martiniere, obviously the continued drillingbut the big surprises probably will come from the exploration rig up on the property there.

TGR: How many meters are you going to be drilling and at what cost?

DW: We did about 12,000 meters of drilling this spring. We'll do probably about another 25,000 meters or so this summer. The summer-fall program budget is about $5 million, and that's already funded. Beyond that we just have to see what Mother Nature has in store for us.

TGR: Any final thoughts that you'd like to leave with our readers?

DW: One thing we're seeing is the focus of the producers on identifying projects with room to grow, decent-sized resources, good grades and good locations. In the last year there has been more and more focus on gold projects in quality jurisdictions from the producers as they're acquiring assets. And certainly, they don't get much better than Quebec. We've seen, recently with the Integra Gold Corp. (ICG:TSX.V; ICGQF:OTCQX) takeover, that there is a premium being paid for assets in that part of the country.

We have one of the few remaining projects out there with district-scale upside. We think we're pretty well positioned, especially with the deposits continuing to grow. And if exploration drills can add to that scenario over the course of the summer months, we think it becomes a go-to place for producers to look at. We look forward to a good summer.

TGR: I appreciate you taking the time today to give us the update and look forward to our next conversation.

Darin W. Wagner, president and CEO of Balmoral Resources Ltd., is a professional geologist with 25 years of exploration and corporate development experience. Wagner spent the first 10 years of his career with two of Canada's largest and most successful exploration and mining companies, Noranda (now Glencore), and Cominco (now Teck), as a project geologist and exploration manager in North and South America. Wagner became president of Sydney Resource Corp. in September 2005 and helped engineer the successful merger between Sydney and Band Ore Resources to form West Timmins Mining Inc. in 2006. He then served as a president, CEO, director and qualified person for West Timmins Mining through the discovery of the high-grade Thunder Creek Gold Zone in Timmins, Ontario, and the acquisition of West Timmins by Lake Shore Gold in an all-share deal valued at $424 million, which was completed in November 2009. In addition to his duties with Balmoral, Wagner currently serves on the Board of Directors of VR Resources and Palamina Corp., and was a cofounder of Falco Resources and a founding director of NewCastle Gold.

Read what other experts are saying about:

Learn from Experts Explore the Company