Being right and sitting tight in gold might not be different things. . .

Berkshire Hathaway legend Warren Buffett reckons it's "being right"—which is about as down-home as the "Sage of Omaha" could get. "Sitting tight"—was the key for legendary "boy plunger" Jessie Livermore, whose personal depression drove him to suicide in 1940, apparently leaving $5 million behind him. Contemporary hedge fund legend Hugh Hendry says your best shot comes from "contentious" positions—taking on trades that no one else dare back, because they can barely conceive of a world in which they might ever pay off.

And right now, what could be more contentious than gold? 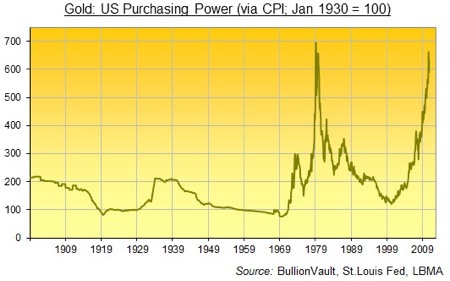 "Without any contentious posturing in your portfolio, I suspect you're not going to make money," Hendry told an interviewer this summer."

"You're not guaranteed to make money by being contentious or controversial," he stressed. "But if you can get your mind around the most contentious viewpoints, I think you stand a better chance of making money."

Now, we know what Buffett thinks of gold, and we know that Hendry didn't buy the bull back in 2008, when gold made headlines amid Phase II of the global financial crisis to date.

"[People] fear financial anarchy. Gold coins are sold out. Everyone is in."

Contrarian investors, therefore, should have stayed out—or even gone short&#151at $800 per ounce. Because "everyone [was] in." Except for all those people who've been buying gold since, nudging it back up towards that all-time high—in real terms—hit at the start of 1980.