Your Gas Profits Are Hiding in Plain Sight

"This asset has been under such heavy scrutiny, it's the first thing investors overlook. In fact, it's been nearly a decade since we've seen this particular commodity this cheap!"

If you've stuck with commodities since 2009, chances are good you've made money.

We've seen oil prices run 300% higher since early 2009. Every gold bug came out of the woodwork when prices topped $1,900. Silver performed even better than its golden counterpart, returning 233% to investors within 24 months.

Throughout this entire run, one commodity has been kicked and dragged through the dirt.

This asset has been under such heavy scrutiny, it's the first thing investors overlook. In fact, it's been nearly a decade since we've seen this particular commodity this cheap!

It's a Natural Gas World

My readers know this story all too well.

Unlike the assets I mentioned above, natural gas prices have crashed more than 73% since the summer of 2008: 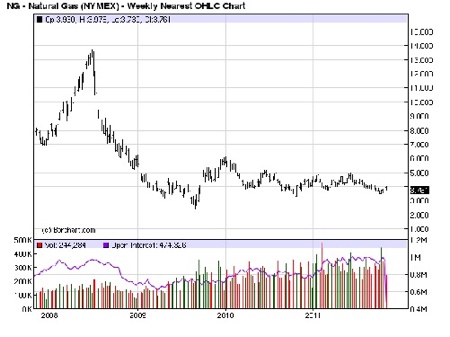 You'd be hard-pressed to find an uglier chart.

Despite the beating prices have taken, the smart money can see what's coming.

Meanwhile, production isn't even close to meeting that demand—just one of the reasons China's LNG imports grew 75% in 2010.

In Europe, where oil production is declining at an annual rate of 8% due to aging oil fields, gas consumption has grown almost 3% per year since the 1980s!

Wondering why Spain is suddenly interested in developing its shale gas resources? Or why Poland's shale gas is threatening Russia's domination over Europe's natural gas markets?

Russia—which officially took back the title of "World's Largest Gas Producer" from the United States in 2010—won't be left in the dark.

Putin graciously offered Exxon the opportunity to help develop its arctic oil fields. Of course, the deal came with an interesting hitch. . .

In order to have access these untapped oil fields, Exxon will literally teach the Russians how to extract natural gas from tight shale formations.

It's a good thing Exxon dished out $41 billion for XTO Energy. . .and that the company has its hands on 317,000 Marcellus acres, acquired in a $1.7 billion deal for two privately-held natural gas companies: Phillips Resources and TWP Inc.

In fact, I'm not so sure we should refer to Exxon as the world's largest publicly traded oil company any more. . .

We already know the company is having a difficult time with oil production. ExxonMobil averaged 2.2 million barrels per day during the last quarter, a 2% year-over-year decline.

Keep in mind that the company needs to find almost 150,000 new barrels of oil to make up for the natural decline of their fields.

Looks like 2011 just isn't turning out the way they'd hoped.

While Exxon's crude output is declining, its natural gas production has never been better.

The 12.9 Bcf/d the company produced during the first nine months of this year is 14% higher than a year ago.

When it comes to oil, there's not a lot of room for substantial growth for companies like Exxon. After all, 90% of the world's oil reserves are controlled by a handful of national oil companies.

But the breakdown for control over the world's natural gas reserves is much more open: 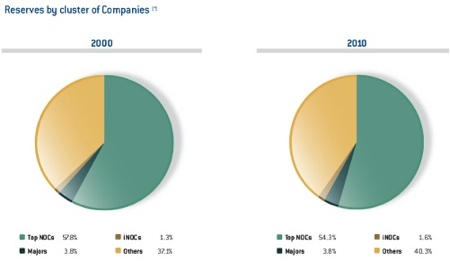 Why NOW Is the Time to Buy

Personally, I prefer to let oil and gold steal the media headlines, because the best time to invest in something is when nobody's talking about it.

It's simple enough: Prices are hovering around $3.75/Mcf in the U.S. and storage levels are climbing to near record levels.

This trend is about to reverse.

With the onset of winter, the upcoming draw on U.S. storage levels is ready to begin:

The gap between oil and gas rigs drilling on U.S. soil continues to widen.

Make no mistake; natural gas under $4 is extremely cheap. . .and prices could easily climb above $6 with the arrival of cold weather.

The Good, the Bad, and the Ugly

Unfortunately, not all gas investments are created equal. (If they were, our jobs would be much easier.)

As you can see below, the price crash of the last two years has been kind to some, flat for others, and downright abysmal for a few.

Now, I've offered my thoughts on supermajors like ExxonMobil in the past&#151as well as the idea of betting on a natural gas ETF like UNG. 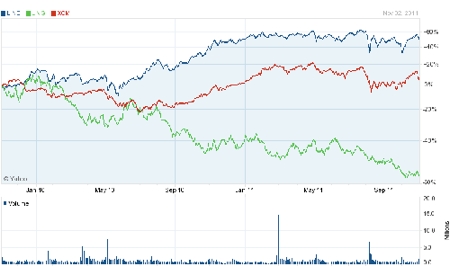