"Given the fact that Eurasia, Latin America, the Middle East and Africa comprise most of the world's population will The New Steel Silk Road be the building block for a truly developed global economy?"

As a general rule the most successful man in life is the man who has the best information.

The Silk Routes, collectively known as the "Silk Road", refer to a 7,000-mile network of interlinking trade routes that were used for three millennia. They connected China, India, Tibet, the Persian Empire, the Mediterranean countries and parts of North and East Africa. 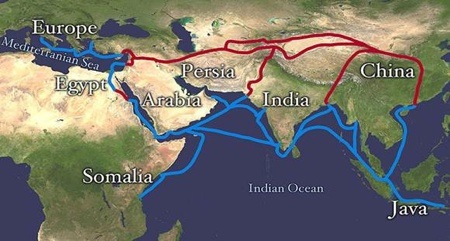 The Maritime Silk Road was a network of shipping lines from the Red Sea to East Africa, India, China, and Southeast Asia. The network consisted of ship routes in two general directions: the East China Sea routes and the South China Sea routes.

The East China Sea routes connected the Chinese mainland to the Northeast Asian regions of the Liaodong Peninsula, the Korean Peninsula, and the Japanese Isles. The South China Sea route heads down, then up, through the Malacca Straits into the Bay of Bengal, opening up China to the coasts of the Indian Ocean, the Red Sea, the Persian Gulf and the African continent.

These shipping lanes are still in use.

Willem Buiter and Ebrahim Rahbari, Citigroup Inc. economists, predict growing trade links between emerging markets will increase worldwide trade in goods and services from $37 trillion in 2010 to $149 trillion in 2030. They also estimate that China will overtake the U.S., within four years, to become the world's largest trader.

"It is the start of a new cycle. China has companies that are willing to invest, they have products that are good enough, and they are backed by abundant liquidity in the country's financial system." -Ben Simpfendorfer, author The New Silk Road

"Thick borders discourage capital inflows, keep people trapped in rural poverty and leave economies persistently underperforming. Only if they can connect with each will emerging nations be able to turbo-charge their economic futures." -Stephen King, HSBC's London-based chief economist, author of Losing Control: The Emerging Threats to Western Prosperity

The MSCI Emerging Markets Index has risen 102% since January 2009, that's compared to the 41% gain in the MSCI World (MXWO) Index of 24 developed markets.

The real point of modernizing railways, and the major reason for China's global push for High Speed Rail, is the increased movement of cargo&#151a shift in passenger traffic to the new high speed routes frees up space on the older, now congested legacy lines for increased freight shipping.

Shippers can switch to cheaper rail transport instead of using trucks for long haul of heavy bulky cargos. According to the World Bank, because of this shift and the construction of additional freight lines, the tonnage hauled by China's rail system increased, in 2010, by an amount equal to the entire freight carried by the combined rail systems of Britain, France, Germany and Poland.

China's total investment in high-speed rail was first reported to be about US$300 billion (B)—the Chinese planned a 12,000 Km. high- speed passenger network supplemented by 20,000 Km. of mixed traffic lines capable of 200-250kph.

China has plans to construct its high-speed rail line through Asia and Eastern Europe in order to connect to the existing infrastructure in the European Union (EU). Additional rail lines are planned into South East Asia as well as Russia—this will likely be the largest infrastructure project in history.

The project will include three major high-speed lines

Financing and planning for this monumental project is being provided by China—who is already in negotiations with 17 countries to develop the project. In return the partnering nation will provide natural resources to China.

"We will use government money and bank loans, but the railways may also raise financing from the private sector and also from the host countries. We would actually prefer the other countries to pay in natural resources rather than make their own capital investment." -Wang Mengshu, a member of the Chinese Academy of Engineering and a senior consultant on China's domestic high-speed rail project 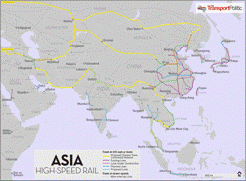 The exact route of the three lines has yet to be decided, but construction for the South East Asian line had already begun in the Chinese southern province of Yunnan and Burma is about to begin building its link. China offered to bankroll the Burmese line in exchange for the country's rich reserves of lithium, a metal widely used in batteries.

Russian Railways, the state rail monopoly, plans to build a 15bn high speed railway line between Moscow and St Petersburg that will eventually reach at least ten Russian cities in the European part of the country.

China sees Russia as a land bridge to Europe and has urged the country to extend its planned HSR network further east to connect the two countries.

Russia and China have announced plans to build a new trans-Siberian link.

Russia wants to build a $65B railway from Siberia to North America. This line would extend the proposed Chinese-Russian rail line across 3/4 of the Northern Hemisphere.

China has already built a line linking Tibet to the rest of China—it crosses 550km of continuous permafrost and experiences extreme temperatures swings.

Iran, Pakistan, and India are each negotiating with China to build domestic rail lines that would link into the overall transcontinental system. Iran's Press TV reported that the two countries had signed a $13B contract for China Railways to build 5,000 Km. of track in Iran.

Vinay Mittal, the Chairman of the Indian Railway Board, told Indian media that high-speed trains were feasible and necessary for India, especially for freight corridors.

Planning Commission Deputy Chairman Montek Singh Ahluwalia said if India is looking at a GDP growth rate of 5%, the present rail infrastructure is fine, but if it wants to grow by 9%, it needs the high-speed rail networks.

The Marmaray project is a rail transport network around Istanbul and the world's deepest immersed railway tunnel under the Bosphorus strait.

Marmaray is an important junction as it will act as the connector between subway and railway lines in the European and Asian parts of Turkey. 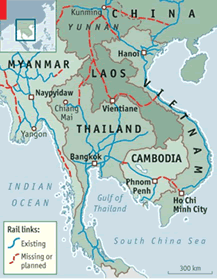 China is laying tracks to mainland South-East Asia. It has recently signed agreements to build new lines in Laos and Thailand, while it extends its network from Kunming to the China-Laos border.