Not Worth a Continental

Sun Tzu said to keep your wars short and have the money in hand before assembling an army. Perhaps the U.S. Congress should consider Sun Tzu's advice?

As a general rule, the most successful man in life is the man who has the best information.

Wars cause inflation—war affects everything from international trading to labor costs to quantity of available consumer goods to product demand because governments:

"In World War I, the American people were characteristically unwilling to finance the total war effort out of increased taxes. This had been true in the Civil War and would also be so in World War II and the Vietnam War. Much of the expenditures in World War I, were financed out of the inflationary increases in the money supply." -David Hackett Fischer, Author, The Great Wave, Price Revolutions and the Rhythm of History

"Every major war in the past century brought inflation to some degree. And so did two upheavals in the Middle East, the Yom Kippur War of 1973 and the Iranian Revolution of 1979, which did not directly involve the United States, except through their effect on the price of oil. Why is this so? The big reason is that wars must be paid for, somehow. They require resources that civilians would otherwise use. Those resources must be diverted to the war effort. Usually, inflation is the easiest way. World War I was largely financed by inflation, and so were the Revolutionary and Civil Wars before that. So, though on a smaller scale, was Vietnam.

"Inflation applies the law of the jungle to war finance. Prices and profits rise, wages and their purchasing power fall. Thugs, profiteers and the well connected get rich. Working people and the poor make out as they can. Savings erode, through the unseen mechanism of the "inflation tax"—meaning that the government runs a big deficit in nominal terms, but a smaller one when inflation is factored in." -Economist James Galbraith

"War has a profound effect on the economy, our government and its fiscal and monetary policies. These effects have consistently led to high inflation." -Blanchard Economic Research

"War is inflationary. It is always wasteful no matter how just the cause. It is cost without income, destruction financed (more often than not) by credit creation. It is the essence of inflation." -James Grant, Grant's Interest Rate Observer

"This country's first two experiences with high inflation were during the American War of Independence (1775-83) and during the Civil War. There was also high inflation associated with the First World War; the unifying theme running through inflation episodes are the occurrence of bad times, often as a result of war or its aftermath. After the Second World War, inflation became the norm everywhere in the industrial world. There was another surge of inflation during the Korean War, which took inflation in the U.S. above 9% in 1951 (and wholesale price inflation into double digits). The inflation that accompanied the Vietnam War and the Yom Kippur War, and oil price shocks in the 1970s, led people to increase their inflationary expectations, which aggravated inflation itself." -Roger Bootle, Author, The Death of Inflation

War and Inflation in U.S. History 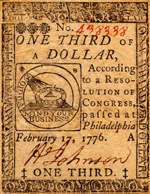 The United States has experienced two currency collapses due to inflation:

"One can say without exaggeration that inflation is an indispensable means of militarism." -Ludwig von Mises

The American Colonies lacked the necessary finances to rebel against Britain—instead of raising money through taxation they decided to print a "Continental Currency".

Unfortunately for the Colonies their new currency was easily counterfeited. And Britain did so, counterfeiting large amounts and giving it away to destroy its value.

Between the combination of counterfeits and increased continental printing the value of the colonies paper currency became worth 1/1,000th of its original face value by the end of the war. The saying "not worth a continental" was a result of this massive devaluation. 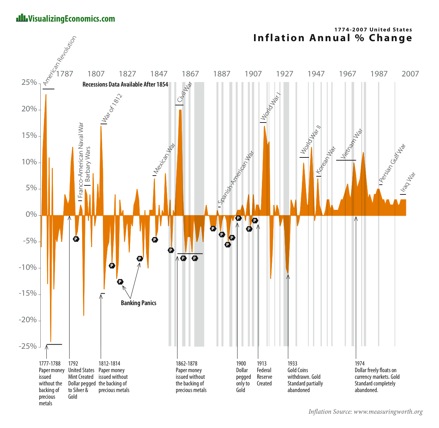 The top four inflationary periods in the U.S. are:

Worldwide military spending edged up in 2010, to a record $1.6 trillion, the Stockholm International Peace Research Institute said in April 2011.

Spending in Europe shrank 2.8% to $382B, the biggest cuts were in small economies in central and eastern Europe, and in countries such as crisis stricken Greece.

The Unites States increased spending, in 2010, by 2.8% to $698B—six times as much as China spent for defense spending. Not included in U.S. numbers are nuclear weapons spending, black ops, interest on the defense portion of the debt and ongoing military obligations to veterans.