Is This How Gold's Bull Market Ends?

"The dollar and the yen are at the heart of this current slump."

Remember Lehmans? Even the smart people get whacked in a financial crash. . .

People think the gold price always goes up in a crisis, right until they find out it doesn't. And the reason that this now feels so much like the Lehmans collapse of three years ago is that, looking at the numbers alone, you'd think it was autumn 2008. 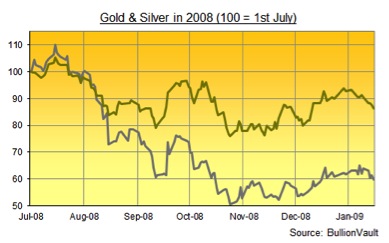 Put silver to one side. Because with 60% of annual demand going to industry, the restless metal remains very exposed to the global economic downturn. Whereas gold, long term, tends to rise when other investments—shares, bonds, cash, real estate&#151fail to deliver.