Has the Fed Started QE3?

"The Fed policy is to let the dollar fall and to support the bankers and politicians who want to stimulate the economy."

The Fed surprised the market by extending its policy of 0 to 0.25% Fed funds rate to mid-2013. The way the Fed manages to drive rates lower is to buy treasuries with newly created money&#151driving the price up and the rates down. The big question is whether the policy will have a sizeable effect on markets. The chart below shows the historical jump in the Fed's combined policy tools that were used to lower rates and bail out financial institutions through a variety of programs. These include the big purchase of mortgage-backed securities (MBS) called QE1 and the large purchase of treasuries called QE2.

The point of the extrapolation in the chart is just to guess how much more money the Fed might need to create to keep the rate extremely low for another two years. By connecting a straight line from the start of the unusual policy tool expansions in late 2008 to today's number and then extending it to 2013, we can estimate that the policy might require about $1.5 trillion in order to keep the rate low. 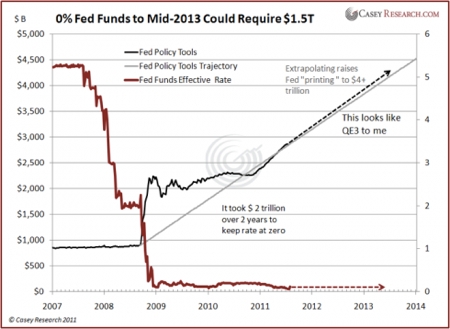