"The world's middle and lower classes are being targeted to pay down global debt."

On our 6-month chart, we can see gold's breakout and how, after seven days of gains, it is starting to become overbought. However, apart from brief pauses to partially unwind the overbought condition, it is expected to continue to advance strongly in coming weeks and months, overbought or not, and this positive outlook is reinforced by the strongly bullish picture for silver and precious metals stocks. 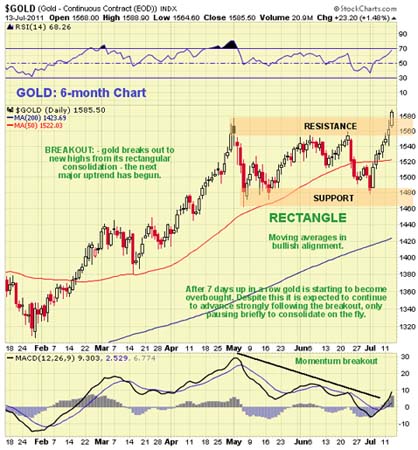 There has been talk in some quarters about gold "being in a bubble," but our long-term chart for gold going back to before the start of the bull market, shows that such an assertion is ridiculousgold has been in a steady uptrend as it has moved simply to compensate for the destruction of the purchasing power of fiat. What we are seeing here is real money, which gold is, standing out in an ocean if increasingly worthless fiat. Since gold has not been in a bubble and has not attracted the attention of speculators to any great degree it can be said to have an almost full tank of "bubble power," and if, in addition to its continued rise to compensate for the relentless attacks on fiat by central bankers and politicians, it does attract the attention of the investing public at large, its rate of rise could very easily accelerate rapidly and it could go into an ascending parabolic arc. This development is actually viewed as inevitable as we move ever closer to the fiat endgame of hyperinflation, but as we can see on the chart, it hasn't even started yet. 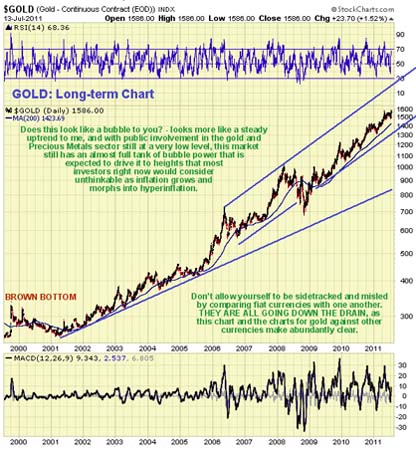 Speaking of gas in the tank, the last COT chart showed a setup similar to that which existed back at the start of February&#151before a $260 run-up in the price of gold—so the implications of this chart are obvious. 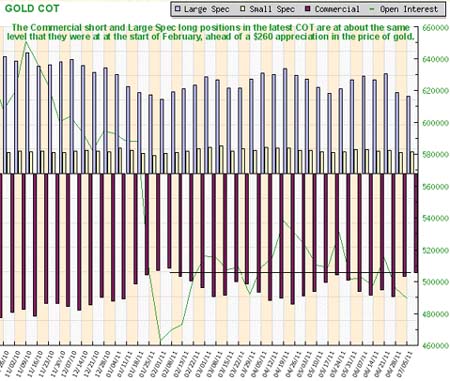 We are going to end this gold market update by briefly summarizing the "global playbook"—once you grasp what is set out below you will understand why the continued advance in the prices of gold and silver are inevitable, and why their rate of advance is set to accelerate.