"Any idiot can create growth of this magnitude by exploding the money supply."

As stock charts no longer see fit to run usable charts for gold and various other commodities—line charts are suitable only for school kids or journalists doing projects on the markets, not for serious analysis—we are going to use the chart for SPDR Gold Trust (GLD) as a stand in for gold. It is a very accurate proxy, and should continue to be, unless of course, the markets were suddenly to discover that they don't have the gold in their vaults that they say they have.

Our 4-year chart for GLD shows that holders of this ETF, and therefore of gold, have not really had anything to worry about for 2 years now, as the steady uptrend in gold has continued. Rather astonishingly, despite the recent severe deterioration in the charts of other commodities and markets, including PM stocks, gold has continued to hold up very well, although it did break sharply lower late last week which we will now look at in more detail on the 1-year chart. 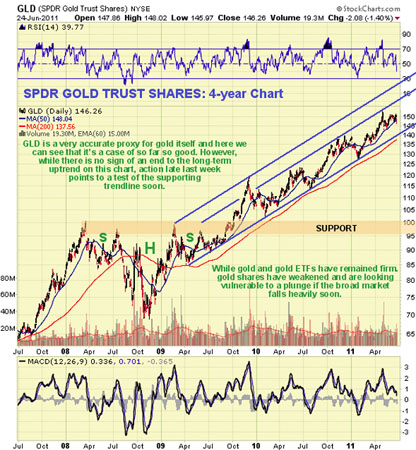 On the 1-year chart for GLD, we can see that after peaking at the end of April it fell sharply early in May at the time that silver plunged and then recovered well in a triangular pattern that formed above the 50-day moving average. After looking like it was breaking out upside on Wednesday, it gapped down on high volume on Thursday before breaking down from the Triangle and below its 50-day moving average on Friday. This was bearish action and put us on the defensive, despite the longer-term uptrend remaining intact.

While long-term investors need not be unduly perturbed by this and may only want to consider either trimming positions or hedging in the event that the long-term uptrend shown on the 4-year chart fails, traders have a variety of tactics at their disposal and may want to cut back positions here with a view to getting back in either on the price dropping back to the supporting trendline (with a close stop) or conversely on a break above $152. The point to grasp is that while the long-term charts for gold and GLD still look solid at this point, they could still take a hit if we get a 2008 style market meltdown shortly, and as this is considered very likely, we are going to take a look at the charts for the broad stock market and banking and oil sectors in this update. Here we should note that as we are much deeper into the debt crisis endgame than we were in 2008, gold might prove to be much more resilient than it was then, as it will be one of the only games in town and, ultimately, once the inevitable hyperinflation kicks in, it will go through the roof. 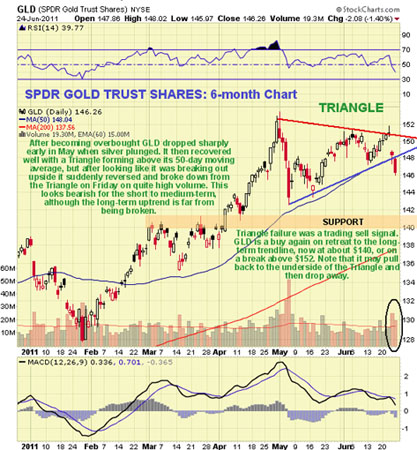 Now we will veer off to see what is going on in the broad stock market and the banking sectors, because of the major implications for everything, especially commodities including gold and silver, and because of the potential for massive collateral damage to be inflicted again on precious metal stocks, the outlook for which we will examine towards the end of this update with a look at the HUI Index.

Many observers have been wondering what kind of pattern is forming in the broad market, as quite clearly it has been losing traction and rounding over for months. What has been going on is that the market has been trapped beneath the confines of a large distribution dome that is drawn on the 1-year chart for the S&P500 Index shown below.