"Was the SPX's latest interim high greedy enough to kill this latest bull?"

Thanks to June's sizeable and rather sharp stock market selloff, fears are growing that a new bear market is brewing. For investors and speculators, the implications of these concerns are not trivial. Optimal trading strategies vary wildly between bull and bear, as bears relentlessly maul down all sectors including popular ones like commodities stocks. So, Friday's bull-or-bear question is critically important to address.

A bear market is simply a prolonged period of falling prices. These dreaded beasts come in two distinct breeds, secular and cyclical. Secular means long periods of time, on the order of a decade or more in financial market terms. The U.S. stock markets actually have been continuously mired in a secular bear for over a decade now. So, any new stock bear can't be secular, as we're still languishing in an old one.

Any new stock bear Friday has to be cyclical. The U.S. stock markets (as measured by the flagship S&P 500 stock index (SPX) soared 102% higher between March 2009 and April 2011 in a powerful cyclical bull. So, a cyclical bear is certainly due next when the past couple years' bull inevitably gives up its ghost at some point. Is that time now? Maybe, but we don't have a high-probability new bear setup yet.

All this secular-cyclical, bull-bear stuff is much easier to understand once you see it visually. This first chart superimposes Friday's SPX secular bear since 2000 over the last secular bear that ran from 19661982. Note that contrary to popular assumptions on bears, their secular variants don't see prices fall straight down. Instead, a secular bear is a long consolidation&#151a demoralizing 17-year sideways grind. 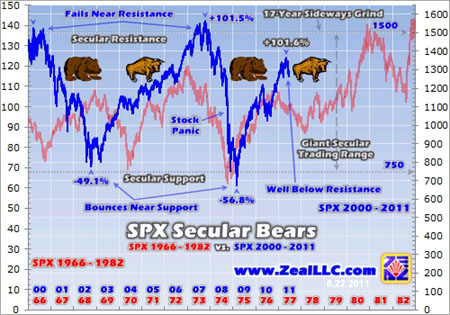 These giant secular-bear trading ranges are readily evident in this chart. Ever since the last secular bull ended in early 2000, the SPX has traded in a massive sideways range running from roughly 750 on the low side to 1,500 on the high side. Friday's secular bear started near 1,500 in March 2000, and this level isn't likely to be significantly exceeded until this secular bear fully runs its course by 2016 or so.

However, within the bounds of this secular trading range, powerful cyclical bears and cyclical bulls meander. The cyclical bears tend to cut the headline S&P 500 in half, while the subsequent cyclical bulls tend to double it. These big swings are very tradable, but their net result is a wash. Even at the peaks of these mighty cyclical bulls, the SPX doesn't achieve levels much better from where its secular bear was originally born.

The latest cyclical bull running from March 2009 to April 2011 definitely achieved this doubling, rallying 101.6%. This is nearly identical to the previous cyclical bull's 101.5% gain between October 2002 and October 2007. So with this latest doubling right in line with classical mid-secular-bear cyclical-bull expectations, isn't a new cyclical bear likely? Unfortunately, the answer is not as clear-cut as usual.

Back in autumn 2008, the U.S. stock markets plummeted in the first true stock panic in 101 years. These ultra-rare events are driven by a mind-blowing explosion of popular fear. That fear, as measured by the definitive VXO fear gauge, climaxed in November 2008 when the SPX closed at 752. This was right at the lower support of this secular bear's trading range, where Friday's cyclical bull ought to have been born.

But, unfortunately, in early 2009, the United States of America suffered a change in management thanks to the stock panic's horrendous impact on sentiment during the November 2008 elections. In early 2009, the incoming Democrats terrified the stock markets with their brazen claims that the already-crushing taxes on American investors and businessmen were too low. They also threatened endless new job-destroying regulations, primarily socialized medicine, that would choke off the fragile post-panic recovery.

This Democrat despair peaked in early March 2009, driving a much-lower secondary panic low of 677 on the SPX. Not only are such secondary lows unheard of in the history of panics, but the fear reads of these two bottoms confirm this was a curious anomaly. When the SPX hit its original and true panic bottom of 752 in November 2008, the VXO fear gauge closed at an epic 87.2! But in March 2009, when the SPX slumped to 677 in despair, the VXO merely closed at 51.5. This was 41% less fear!

Fear, and hence, the proper stock panic climaxed in November despite the lower secondary March low! Even though this secondary low was not righteous, a total anomaly, the subsequent cyclical stock bull is still measured from it. March's 677 was 10.1% lower than November's 752. If we instead consider this bull as launching from its true panic low, it was up only 81.2% by its latest interim high in late April 2011.