"European central banks are not selling gold—they're buying it."

European central banks are not selling gold. They are buying it. . .Eurozone central banks have stopped selling and started buying gold so far in 2011—only by 6 million mind&#151and all of it in gold coins, according to the European Central Bank's weekly statements. But this net gold buying still stands, even ignoring Estonia's 0.6-ton purchase at New Year (its contribution, on on joining the euro, to the ECB's reserve assets).

New-member stockpiles and data adjustments aside, it's the first net rise since the single currency was launched in 1999. 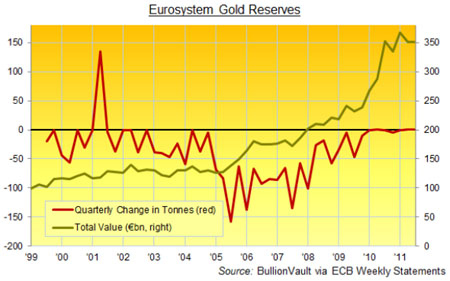 Just shy of 180 kg. by our math here at BullionVault (that's 5774 troy ounces in old money), this year's small addition-to-date to the Eurosystem's gold bullion holdings barely registers against the 1,937 tons of sales over the previous 12 years.

It's also a drop in the bucket compared to the Eurozone's joint spending on Greek, Irish and Portuguese bailouts, too, let alone the ECB's swollen balance sheet. But it confounds those "rumors of rumors" of European central banks selling gold here in 2011 to help fund the next round of Eurozone rescues.