"Silver cheerleaders are hailing a fantastic buying opportunity. Is it?"

Silver newbies discovered to their shock and horror last week that silver can actually go down as well as up, and even worse, that it drops a lot faster than it goes up. We were partly fooled ourselves last week by the seemingly bullish COT figures, but not to the extent that it stopped us implementing protection in the form of Puts, or Calls in silver bear ETFs such as ZSL.

After last week's devastating plunge the silver battlefield is littered with the corpses of silver longs, with those who are still breathing being exhorted to "put their shoulder to the wheel" again by undismayed silver cheerleaders, who are hailing a "fantastic buying opportunity" for the ride of a lifetime. Is it?—Let's see what the charts have to say. 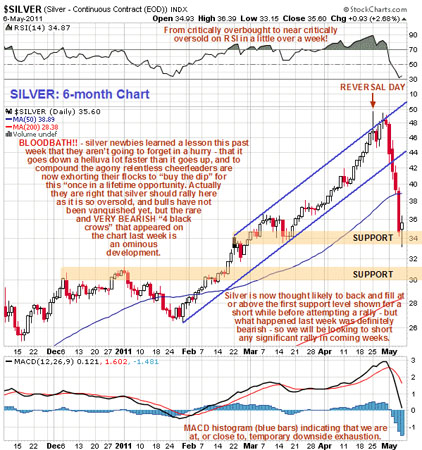 On its 6-month chart we can see that after hitting the top of its intermediate trend channel in the high $40's, where it showed signs of running into trouble that we will look at in more detail on a one-month chart, silver suddenly turned tail and plunged, crashing through the lower support line of the channel as if it wasn't there. This near vertical plunge took the form of a rare and very bearish "4 Black Crows" that we will also delineate on the one-month chart. By Friday, silver had gotten deeply oversold and the steep downtrend paused at the support level shown, with a more bullish long-tailed candlestick appearing on the chart. The cheerleaders are certainly right that silver is now short-term oversold, and some sort of rally looks likely soon, probably after some choppy action near the upper support level on our chart&#151and it could drop even lower toward the lower support level shown and its 200-day moving average before a significant rally occurs. Should such a rally get going it will of course be hailed by the cheerleaders as the "start of the big one" and it could be if the dollar tanks, but what concerns us is the bearish 4 Black Crows" candlestick pattern that occurred last week, which portends a more prolonged and severe decline—possibly even a bear market. Yet how can that be? —Isn't the Fed's reckless and relentless money printing and zero interest-rate policy pushing the dollar ever closer to the abyss and the U.S. toward hyperinflation. Yes it is, but do you think the Fed doesn't know that? These people should not be underestimated—keep in mind that they engineered a financial system which essentially turned the rest of the inhabitants of this planet into servants of the United States, with their reserve currency status for the US dollar, and have cajoled the rest of the world into handing over its savings to be used to support a sumptuous standard of living in the US and a big military to police the globe in furtherance of US interests. So put yourself in their shoes now and imagine that you are faced with a collapse of both the US dollar and the Treasury market—what's the best way to prop up both and buy some time? Give you a clue—think 2008. Got it yet? Well, in case you haven't, I'll spell it out for you. . .