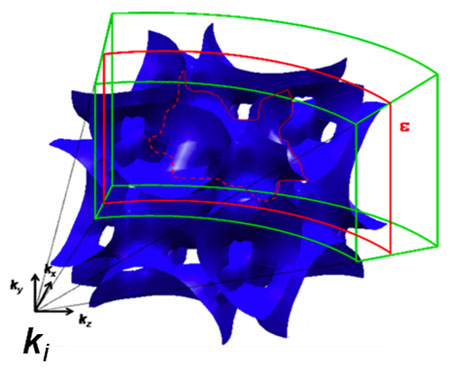 For some years now, NASA has been using what are called "thermoelectric materials" to power its space probes. The probes travel such great distances from our sun that solar panels are no longer an efficient power source. So, NASA imbeds a nuclear material in a radioisotope thermal generator, where it decays, producing heat energy. That energy is then converted by thermoelectric materials into electricity that powers the space probe. The same technology is now being explored for more earthly applications; for example, to capture heat lost through car exhaust to produce electricity for the vehicle.

Researchers, funded by the DOE, are now studying the hot new technology. ORNL Shull Fellow Oliver Delaire is part of such a collaboration, this one led by an EFRC at MIT. Delaire uses neutron scattering and computer simulation to investigate the microscopic structure and dynamics of thermoelectric materials so researchers can make them more efficient for new, energy-saving applications.

Thermoelectrics are adaptable for both heating and for cooling applications. They also can convert low-grade heat that is wasted in an industrial process into electricity or transport heat from an external power source and manipulate it to cool a surface.

But there are limitations in the materials themselves. "Right now, the materials may be on the order of 10% efficiency," Delaire said. "If we can make them two or three times better, if we can get 30% efficiency, that would get people very excited and be much more viable economically."

The researchers want to improve their understanding of phonons, the atomic vibrations that transport heat through thermoelectric materials. "Neutron scattering is unmatched in its ability to probe the atomic vibrations in the crystals," Delaire said. "This is one of the fundamental blocks in the process that we need to understand better."