The Seasonality of the Longwave Principal

"Flight into gold will rush into panic as the debt crisis assumes epic proportions."

I have been asked: "Under what circumstances would you change policies and start investing in areas other than gold." This was answered in an earlier Ian's Insights: The Perpetual War-Gold vs. Paper, which will be updated shortly. My thesis in that paper was to demonstrate that investments in the general stock market work well in the spring and even better in the autumn of the cycle, whereas investments in gold and gold stocks create great returns in the summer and winter of the cycle. Over the long term, such as a Kondratieff season, an investment in the general stock market is always diametrically opposed to an investment in gold and gold shares.

This is best demonstrated by a review of the Dow:Gold chart, which is the value of the Dow Jones Industrial Average divided by the U.S. dollar price for an ounce of gold. When the stock market and general stocks perform well, as in spring (19491966) and autumn (19822000), the ratio rises and at the end of the season reaches an extreme high. When the price of gold and the values of gold shares are the seasonal investment in favor (summer 19661980 and winter 2000?) the ratio falls in value and reaches an extreme low at the season's finale.

So, you ask, "When will I change my investment strategy?" That's easy. I'll move my investment money out of gold and gold shares and into the general stock market when the Dow:Gold ratio reaches an extreme low. Previous extreme lows have been at 1/1. I'll be watching at that level, but I think this time the low is going to fall to something like 1/0.25 (the dollar value of 1/4 ounce of gold will be the same as the value of the Dow Jones Industrial Average). Why do I expect such an extreme low? I have two reasons: 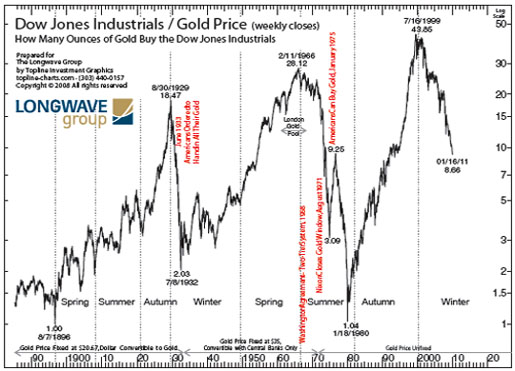