How Much More Demand Can Silver Handle?

"Silver demand numbers are starting to make some market-watchers nervous."

The numbers for silver demand are starting to make some market-watchers nervous. The U.S. Mint sold over 6.4 million Silver Eagles in January, more than any other month since the coin's introduction in 1986. China's net imports of silver quadrupled in 2010, to 122.6 million ounces, roughly 13.7% of global production. Meanwhile, mine production can't meet worldwide demand; the only way demand gets fulfilled is from scrap supply.

That is some very hungry demand. Which raises the question, how long can this pace continue?

This is important for various reasons, starting with how demand contributes to price. If demand falls off, our investments could, too.

While I've discussed the concern regarding the lack of supply before, which has its own implications for the silver market, let's focus on investment demand. Frankly, is there room for it to continue to grow? After all, how long can investors continue to set records?

There are a number of ways to measure thisthe amount of money available to invest, its percent of total financial assets, its contrast to demand in the last bull market, etc.but I think the bottom line to answering the question is to compare the biggest silver investments to some popular equities. If they rival that of the stocks we always see on the news and analysts constantly talk about and every fund manager wants to own, then it might be reasonable to assume demand could be nearing its pinnacle.

So how do the world's largest silver ETF and one of the biggest silver producers compare to the more fashionable equities? 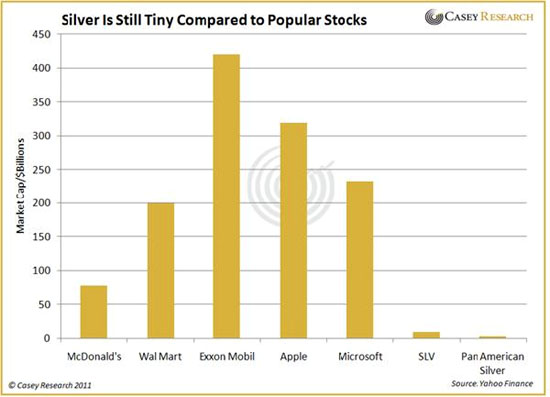 The largest silver ETF, iShares Silver Trust, has net assets of $9.6 billion (as of February 4). This pales in comparison to the more popular stocks trading in the U.S. In fact, SLV has roughly 3% the market cap of Apple. It would have to grow over 43 times to match Exxon Mobil.

Pan American Silver, the largest pure silver producer trading on a major U.S. exchange, has a market cap of $3.72 billion. This is 4.7% the size of McDonald's. The market cap would have to increase more than 53 times to match Wal-Mart. It is over 62 times smaller than Microsoft.

This isn't to suggest SLV and PAAS will match the market cap of these other companies, but clearly the masses are still demanding much more of them than the biggest of silver's investment vehicles.

So, how much more demand can silver handle? As much as it takes to make it the household name, I'm convinced it will be before this is all over. . .when SLV is a favorite of fund managers. . .when Silver Wheaton is a market darling of the masses. . .when Pan American is Wall Street's top pick for the year.

Imagine what those bars on the right will look like when most everyone you know is talking about poor man's gold. The rise could be breathtaking.

Remember that silver rose over 3,646% from trough to peak in the last precious metals bull market; it's up about 630% in our current run. A return matching the 1970s advance would push the price to $152. This price level is further supported by the fact that this is about where it would be when inflation-adjusted for its 1980 peak.

When you look at the potential growth in market cap of the world's biggest silver investments, it becomes easy to view any downdraft in price as nothing but a buying opportunity. I know I do.

The current edition of BIG GOLD includes naming the cheapest 1 oz. bullion coin on the market right now, plus a new gold stock pick that has incredible growth potential. Get all this and more for only $79 per year, including a three-month trial with full money-back guarantee. Details here.