"Baldwin says he was duped into selling shares in 'Costner solution' as BP agreed to pay more." 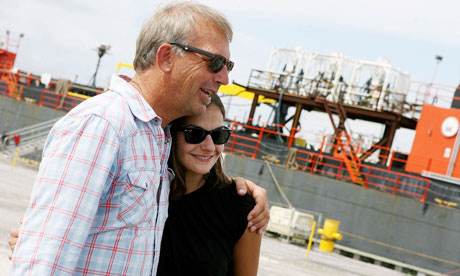 When the Hollywood star Kevin Costner unveiled his wonder cleaning device amid the crisis over the Gulf of Mexico (GOM) oil spill last year, he was lauded as a possible savior. The machine was dubbed the "Costner solution," he was invited to speak before Congress and BP sank more than $50M into the idea.

But not everybody has been delighted by the role Costner played as actor-turned-environmental entrepreneur. Fellow star Stephen Baldwin has launched a multimillion-dollar lawsuit against Costner and his partners in one of the more unusual examples of a Hollywood relationship turning sour.

Baldwin claims he was duped into selling his shares in Costner's invention just as BP was agreeing to pour money into it. He's demanding almost $4M in damages and his fellow claimant, Spyridon Contogouris, more than $10M.

The lawsuit, which was lodged at the new year, has forced a surprising admission from Costner's lawyers. Though Costner acted as front man for the centrifugal devices and presented the case to Congress in June, he has now filed for dismissal of the legal action on the grounds that he played no official role within the company distributing the machines. As the Los Angeles Times put it, Costner had in fact been a "celebrity salesman."

Costner's machine was a byproduct of his 1995 epic flop, "Waterworld." The film got him interested in creating technology that could separate oil from water by spinning it, which would be much less polluting than burning oil on the surface or dispersing it with chemicals.

Costner sank 15 years and >$20M into the project. He told Congress he wanted to develop the technology because he was convinced of its effectivenessnot because "I heard a voice in the cornfield," a reference to his "Field of Dreams" film about a magical baseball park.