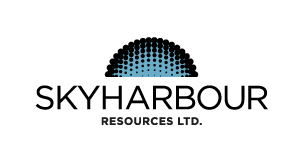 Skyharbour holds an extensive portfolio of uranium exploration projects in Canada's Athabasca Basin and is well-positioned to benefit from improving uranium market fundamentals with eighteen projects, ten of which are drill-ready, covering over 460,000 hectares of land. Skyharbour has acquired from Denison Mines, a large strategic shareholder of the Company, a 100% interest in the Moore Uranium Project which is located 15 kilometres east of Denison's Wheeler River project and 39 kilometres south of Cameco's McArthur River uranium mine. Moore is an advanced stage uranium exploration property with high grade uranium mineralization at the Maverick Zone with drill results returning up to 6.0% U3O8 over 5.9 metres including 20.8% U3O8 over 1.5 metres at a vertical depth of 265 metres. Adjacent to the Moore Uranium Project is Skyharbours recently optioned Russell Lake Uranium Project from Rio Tinto, which hosts historical high-grade drill intercepts over a large property area with robust exploration upside potential. Skyharbour has the Option to acquire an initial 51% and up to 100% of Rio Tintos 73,294 ha Russell Lake Uranium Property strategically located in the central core of the Eastern Athabasca Basin of northern Saskatchewan. Skyharbour is actively advancing and drilling these projects with planned and ongoing exploration programs.

With these various earn-in option agreements and joint venture partnerships, Skyharbour can expect more than $34 million in exploration expenditures, over $20 million in stock and around $15 million in cash payments made to the Company, assuming the partner companies earn-in at their respective projects.
Skyharbour's goal is to maximize shareholder value through new mineral discoveries, committed long-term partnerships, and the advancement of exploration projects in geopolitically favorable jurisdictions.

The information provided above is from analysts, newsletters, the company and other contributors.

The Expert Opinions above are excerpted from third-party sources not affiliated with or controlled by Streetwise Reports. The statements or opinions expressed in the Expert Opinions above are those of the authors indicated, and Streetwise Reports has not verified the accuracy of material excerpted here. Publications excerpted above may receive payment or sponsorship from the company mentioned.

Readers should conduct their own research for all information publicly available concerning the company.