"Big investors are running scared. . .into gold and silver."

After its breakthrough to a then-new high earlier this week, gold consolidated for all of a day at lower levels before continuing to surge upward and this morning was only 1.4% below achieving the $1,300 many of the more conservative forecasters had predicted as a top for the year.

Meanwhile gold's less costly sister, silver, has been quietly getting very close to the $21 high point last seen in March 2008and is actually already above the high Comex and LBMA settlement points of that month. The gold:silver ratio, which many analysts make a point of following, has come down a little further, too, to just over 61 at the time of writing, indicating that silver's momentum is even better than gold's; but it had been having difficulty breaking through the $21 psychological level this morning. While still well short of its all-time high of close on $50 of 1980 when the market was hugely manipulated by the Hunt Brothers, silver is at around the highest levels since that volatile year. 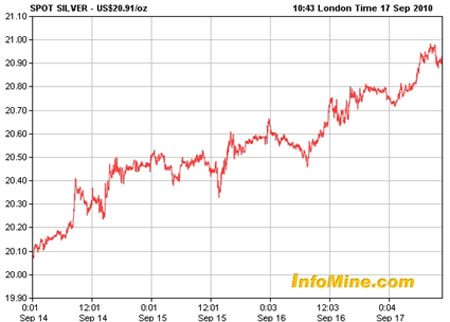 The upward moves have taken place as realization has gathered that, despite politicians' assurances to the contrary, the West's economic malaise is continuing. Eurozone debt problems have resurfaced; U.S. economic data is far from encouraging as statistics fail to impress; money printing by governments is still poised to increase at an alarming rate; even Germany's seeming recovery from recession now looks less firm than it did on some disappointing growth figures.

In short, markets are nervous and the recession seems to be very definitely L shaped at best with double-dip talk gaining prominence again. The big investors are running scared and gold, and silver, are again seen as being the safer option to stocks and shares.