I'm just saying there's hanky panky going on in the stock market, which, I think, is being propped up by the people responsible for the American economy. This is being done to reassure American investors, and there are lots of them, that at least, that measure of their wealth is not being eroded. But it's not just the stock market that is being manipulated. Every official economic government statistic has been presented in the best possible light, in order to convince the public that things are better than they actually are. I am convinced that the officials who run the U.S. government, at least from a financial and economic perspective, Larry Summers, Ben Bernanke, Tim Geithner et al, are presenting dishonest data in an effort to revive the U.S. economy, which is at least 70% dependent upon the U.S. consumer. These officials are trying to convince consumers that they will soon be able to resume the life that they were living, until 2007 brought them down with a dose of reality. That reality was debt doesn't make you rich; eventually, it leads you to the poorhouse, which is where many Americans are now, sadly, en route.

So, all the economic numbers, whether they are unemployment, GDP, housing starts and others are always presented with the most positive spin. In many cases these numbers are adjusted more negatively in the period following their release, which just confirms that the initial numbers were bogus. Officially, the U.S. unemployment rate currently stands at 9.6%. John Williams who tracks the U.S. government numbers shows that total U.S. unemployment, if you include the short- and long-term discouraged workers is now 21.7%. (See shadowstats.com)

To some extent, we understand that governments must be the leading cheerleaders in economics and finance, because they have now become such big fish in the economic pond. Every government, including the U.S. government, now accounts for a significant portion of GDP, which means that their sole income to finance their economic participation must come via taxes. A strong and viable economy is necessary to finance this massive government involvement. Hence, the perpetually bullish 'government speak' on the economy, which maintains, "if you do well (the consumer), we'll do well, because of the taxes you'll pay us."

When the Great Depression hit after the 1929 stock market crash, government officials including President Hoover, were quick to acknowledge the dire straight of the U.S. economy. In fact, in May 1930, President Hoover acknowledged economic depression, when he said to a delegation of U.S. businessmen asking for government assistance, "Gentlemen you have come too late, the Depression ended 30 days ago." Well of course the depression hadn't ended, it had just begun, but at least the President was prepared to call it as it was.

Now, there's no acknowledgement of the severity of the situation; there's no word of 'Depression', only partial acknowledgement of the "Great Recession", which has only been acknowledged by the U.S. press and never has been part of the parlance of present U.S. government officials. These people would like to talk in more benign terms, using such euphemisms as "slowdown," or "contraction," which means that everything adverse in the economy is only temporary and we are all going to get rich again in the not too distant future. Following a recent regularly scheduled meeting of the Federal Reserve's Open Market Committee meeting, there was an admission that the recovery was laboring and its pace "likely to be more modest in the near term than had been anticipated." This acknowledgement, "however weaseled the phrasing, that the recovery is losing traction, stoked immediate fears that, in truth, things are worse, maybe much worse, than the Fed perceives (to be kind) or is willing to admit (to be, well, realistic). Alan Abelson. Barrons, August 2010.

In fact, when man, think Alan Greenspan, does try to oppose the natural outcome of 'irrational exuberance', which of course, is a bust, it only serves to make things a lot worse than if nature had been allowed to take its course. So, after the stock markets peaked in 2000, and were followed by a crash in prices, particularly in the Nasdaq market, Alan Greenspan panicked by lowering interest rates from 6% to 1% and flooding the banks with money, which they lent out to anyone and everyone. This served to revive stock prices (The Nasdaq only recouped 50% of its losses, whereas the S & P 500 effectively double topped with its 2000 peak and the Dow Jones Industrial Average made a new high at 14,200 in October 2007). More importantly, these low interest rates and the plentiful supply of money were the cornerstone of what became, probably, the greatest real estate bubble ever. Now that bubble has burst and the repercussions have devastated many Americans. It will get far worse, despite the efforts of President Obama's team.

If Alan Greenspan had not intervened in the natural process of the unwinding of a speculative frenzy in the stock market, and in particular the hi-tech and dot.com mania, which he recognized as such, the real estate bubble would have never have attained its ultimate size. Its subsequent deflation would have been far less painful than that now being endured by so many Americans. This is the law of unintended consequences.

The intervention now is in the stock market. Of course there is no evidence of such. But we have to understand that after the stock market crash in 1987, President Reagan vowed that such an occurrence would never happen again. To that end, he initiated 'The President's Working Group on the Markets'. This group, which is empowered to thwart any crash in stock market prices, is comprised of the Secretary of the Treasury, acting as chairman, the chairman of the Federal Reserve, the chairman of the Securities and Exchange Commission and the chairman of Commodity Futures Trading Commission.

In 1997, The Washington Post dubbed this group the "Plunge Protection Team"a name now in common usage. In the event of the beginnings of a crash in stock prices, there is really only one way this group can act to avert an all-out panic in the stock marketbuy shares or buy futures in the market. But using government funds for these purposes is expressly forbidden by law, as it should be, for fear that the concept of a free market is compromised. However, we don't believe for a moment that the government has any use for the principal of a free market when the last bastion of American wealth is in jeopardy. Anyway, the PPT can use its proxies, Goldman Sachs and JP Morgan, to do its bidding.

Alan Greenspan, the former Federal Reserve chairman and master bubble blower (but, obviously, still respected by the mainstream U.S. financial intelligentsia, which just goes to show how ingrained they are in their thinking and how dangerous they really are) has several times made reference to the importance of maintaining order in the stock market. On August 1, 2010, in his "Meet the Press" interview, one of the many revealing comments he made was: "If the stock market continues higher, it will do more to stimulate the economy than any other measure we have discussed here." That pretty well says it allat least as far as I am concerned. 'Stock prices must be held up at any cost' to, at least, maintain a semblance of confidence in the U.S. economy.

For many years, the Gold Anti-Trust Action Committee (GATA) has capably demonstrated the ongoing manipulation of the price of gold. Of course, it is important, at least to the U.S. government, to promote the stability of the U.S. dollar, because it is the world's reserve currency. Gold is the measure of that stability. A rising gold price is a condemnation of the value of the U.S. paper dollar, which is being created in copious amounts. Yet, the gold price must be contained to somehow convince the world that the paper dollar is just as good as gold. That battle has already been lost. The price of gold is now well above $1,200 (U.S.) per ounce, whereas it was only just above $250 (U.S.) per ounce in 2001. However, those in power refuse to surrender their paper dollars to gold. They continue their charade.

There it is, nothing is real and honest in the U.S. economy and financial system; it is a chimera, built upon lies and manipulation conjured by the ruling elite.

But this cartel's efforts to support a failing economy, a cheating paper money system and a stock bear market will come to nothing. All markets and the economy are governed by natural law. This means the Kondratieff winter will reach its horrifying conclusion, which is an economic depression of unparalleled severity, brought about by the bursting of the enormous debt bubble, which was fostered by a grossly dishonest fiat monetary system.

Our leaders' efforts to circumvent the natural course of events, which they have generated through their total mismanagement of the economy, are bound to fail. In fact, through their misguided interference in the events that are unfolding will only make matters worse. One piece of evidence in this regard is the huge increase in U.S. government debt, created in an effort to restart the economy. That debt will ultimately bankrupt the United States.

Most people have placed their trust in their leaders, to rescue them from the dire circumstances in which they now find themselves. They are going to be sorely disappointed.

The chart below shows our target for the bottom of this Long Cycle winter bear market. Our reasons for selecting Dow 1,000 as our target bear market bottom are contained in our special edition: Dow 1,000 Is Not a Silly Number and is available to our subscribers. We don't believe that the 'Plunge Protection Team' has a snowball's chance in hell of averting this very low number. 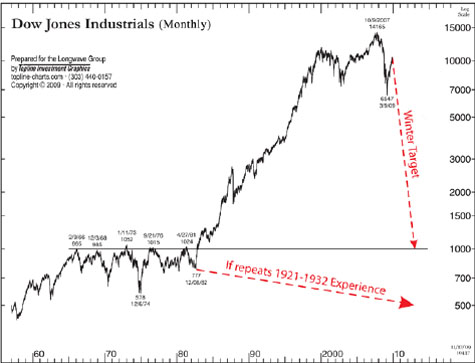