The initial thrust out of one of these major cycle bottoms will usually gain 6%10% in the first 813 days. We are now six days in and up 6.9% so far. I expect we will see a test of the 200-day moving average before we see any significant pull back. These initial moves out of intermediate bottoms don't tend to wait around as smart money smelling blood in the street pile in quickly.

It's only the little guy, who doesn't understand what has just happened, that continues to fight the trend change. This is usually about the time that I see the technicians start calling for this or that resistance level or trend line to put a halt to the rally. They are, of course, assuming this is a bear market rally and it will soon be over.

First off, let me say I'm not convinced yet that the cyclical bull is dead. I would need to see the market come back down and break the recent lows first. If both the transports and industrials do that then yes, we will have a Dow Theory sell signal and at that point I would have to assume that the market has begun the third leg down in the secular bear market that started in March of 2000.

Now let me say this, bear markets don't begin because of lines on a chart. They begin because something fundamental is broken in the economy or financial system. Now we certainly do have a broken financial system, no doubt about it, but then again this cyclical bull was never built on the foundation that we had fixed anything in the financial sector. We certainly haven't fixed anything in the economy with unemployment remaining above 15% if one counts everyone out of work. No this cyclical bull was built on a foundation of massive liquidity. I'm not convinced yet that that fundamental base is broken. Only time will tell.

I'll tell you exactly what halts a bear market rally. Sentiment! Sentiment, at every single one of those rallies during the '07'09 market, reached bullish extremes. Not one single rally was halted by a pivot point or resistance level prior to sentiment reaching extreme bullish levels. 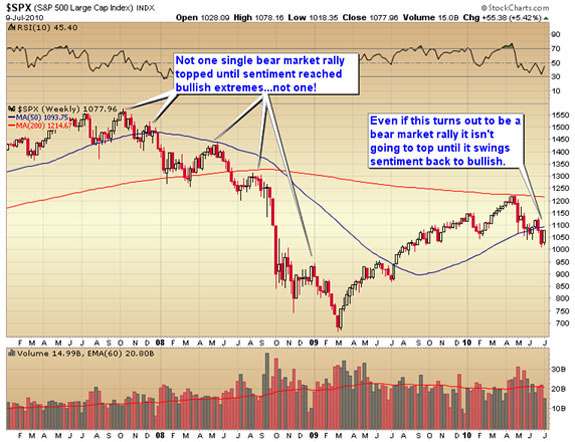 Even after the recent surge, sentiment is still so depressed that it's at levels lower than most of the intermediate bottoms during the last bear market. So let me tell you, if you think the market is going to turn tail and run because it hits the pivot at 1130 or the 200-day moving average, or because you think earnings aren't going to be rosy, you are going to be sorely disappointed.

If this truly is a bear market, then before you even begin to look for a technical turning point you first have to wait until sentiment does a 180-degree turnaround. That just doesn't happen quickly after the kind of beating we just got.

The problem with the move out of the February bottom was that we got no corrections and it quickly turned into a runaway move. Those kinds of rallies tend to end with some kind of mini-crash. I started telling subscribers there was a high possibility of that back in late March and early April. It happened in Feb. of '07 with the China crash and sure enough, it happened again in May with the flash crash.

Traders become extremely complacent during one of these runaway moves. At the April top sentiment had reached levels more bullish than at the top of the last bull market. As usual, we paid a heavy price for that complacency. But now we've swung 180 degrees back in the other direction, with sentiment so depressed it even makes the '09 bottom look positively giddy. That, my friends, is the base for another powerful rally.

Actually, I won't be at all surprised if the market rallies back to new highs...even if we have begun the initial topping process of this cyclical bull. Remember the bear market had already begun in the summer of '07 but that didn't stop it from rallying back up to marginal new highs in Oct. before finally rolling over into the second worst bear market in history.

This idea that the markets can somehow magically look into the future is just ludicrous. I can assure you no one can see the future, and that includes the millions and millions of investors that make up the global markets.

Now let me say thiswe already know where the cancer is. Does that mean the stock market will now start to discount the next bear market? In the summer of '07 we knew the cancer was in the credit markets, initially beginning in the subprime mortgage market. Did the market look into the future and discount the unraveling of the global credit markets at that time? No it did not. The stock market rallied to new highs.

Well, we already know what will eventually bring this house of cards down; it's already started just like it had already started in the summer of '07. We are going to have one sovereign debt implosion after another and that is going to lead to the cancer spreading through the global currency markets eventually infecting the world's reserve currency.

But don't expect the market to look ahead and begin discounting the unraveling of the global currency markets. Markets don't do that. What they do is slowly recognize the fact that the fundamentals are broken. Once enough traders realize that, the markets begin to roll over, usually in an extended process taking many months.

I doubt this time will be any different, especially since the central banks of the world are going to fight the bear with a blizzard of paper. Don't make the mistake of thinking the markets have to act rationally. They don't and won't. If the Fed prints enough money markets are going to rise even though the global economy is crumbling all around us.

If you are bearish and determined to pit your stash against Ben's printing press, I'm afraid you are signing up for one very difficult time ahead. I seriously doubt we are going to see another credit market implosion like we saw in '08. Without a severe dislocation like that, there will be no market crash this time. When the bear does return (and he will eventually), the next leg down is going to be a long drawn-out process with multiple violent bear market rallies. Selling short in that kind of market isn't going to be easy. As a matter of fact, I doubt one bear in 10 will even manage to make money in that kind of environment.

Bears should be careful what they wish for. I suspect the next leg of the secular bear will manage to destroy both bulls and bears alike.