"It's pretty safe to assume Tierney has won the 'peak oil' bet." 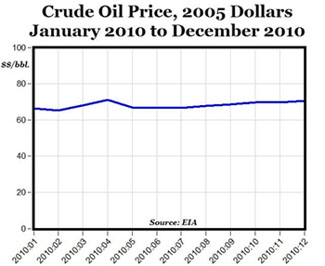 In August 2005, Houston banking executive Matthew Simmons (one of the world's "leading experts" on peak oil, though not very good at predicting oil prices) and New York Times Columnist John Tierney each put up $5,000 and made a bet about the price of oil in 2010.

The wager was based on the price of oil in 2010specifically on the average daily price for the entire year, adjusted for inflation into 2005 dollars. If the inflation-adjusted oil price this year is $200 or more per barrel, Simmons wins $10,000 plus interest; and if the average price this year is less than $200, Tierney wins the bet.

The bet was made public in Tierney's column on August 23, 2005, entitled "The $10,000 Question." Economist Julian Simmons' widow put up $2,500 towards Tierney's $5,000 obligation, to honor the tradition of her husband's famous wager with Paul Ehrlich.

The chart above shows monthly 2010 oil prices (converted to 2005 dollars), including monthly projections through year-end, from the EIA. Now that we're halfway through 2010, it looks pretty certain that average oil prices this year won't even be anywhere close to $100, and will probably average less than $70far below the $200 price predicted by Simmons. Unless oil somehow averages more than $330/barrel for the rest of the year, I think it's pretty safe to assume that Tierney has won the "peak oil bet."