Raw Land Can Be Worth Millions$

"There [could] be enough heavy oil and bitumen in N. America to rival Saudi Arabia"

Today's buyout of Ryland Oil (RYL-TSX) by Crescent Point Energy (CPG-TSX) is a good example of how large "resource plays" can get valued by investors. CPG paid $121.8 million, or roughly $0.45/share for Ryland.

But back in 2006, when the mania of the emerging Bakken oil play in North Dakota and southern Saskatchewan was at a peak, Ryland soared from 10 cents to $4 in months. 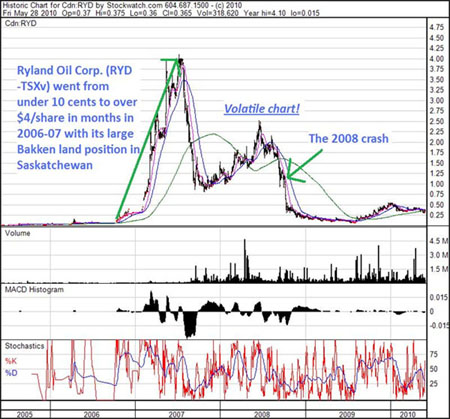 A "resource play" is the industry term for a property that is large and has the potential to host many "repeatable" wellshave the same production as the initial discovery welldozens or hundreds of low-risk wells.

The new shale plays in North America are "resource plays." And the Bakken, the Cardium, the Viking, the Shaunavon formations in Alberta and Saskatchewan are also considered resource plays. One of my key criteria for investing isdoes the company have a large land base around a discovery.

These geological formations have shown they can be very consistent for miles or tens of miles, so the market, in its current psychology, is (very) often willing to price in future growth long in front of a well ever being drilled. Raw land in resource playsnot a single well on themcan make stock prices fly. As the Cardium play in Alberta gained momentum in the last half of 2009, many moribund gas weighted producers were rescued by the fact they had large land positions therecausing their stocks to move up 50% or better in weeks without any drill results!

Petrobakken's (PBN-TSX) purchase of Result Energy (RTE-TSX) in early 2010 is another example of a highly valued land play that was bought out. Result had a land position in the Alberta Cardium play. Cardium land positions were going for as much as $4000 per acre in early 2010. Petrobakken was buying much of that land, and many analysts went negative on that stock afterwards, saying the company had overcapitalized its assets, or, in English, paid too much for the raw land to get a profit out over full cycle costs.

Ryland had small production of 150 bopd of light oil, but had 475 square miles (or sections) of land in various locations in the Bakken play in SE Saskatchewan. However, most of it was in what is called the "Flat Lake" area near the U.S. border.

The way oil and gas analysts at brokerage firms value this type of transaction goes like this: assign a value for the production first, which, reading analyst reports this morning, estimated it at $100,000 per flowing barrel. That equals about $15 million in value (150 x $100,000).

For Crescent Point, that could be very cheap as Enerplus (ERF.UN-TSX) just paid $750,000 per section for land just northwest of Flat Lake. Ryland's price may have been cheaper because it had some gross overriding royalties (GORRs) that could be onerous on cash flow on many of its properties.

Other junior oil players with land in the Flat Lake area near Ryland include (in alphabetical order):I do not own stock in any of these companies, though I am researching one very diligently right now.

Keith Schaefer, editor and publisher of Oil & Gas Investments Bulletin, writes on oil and natural gas marketsand stocksin a simple, easy-to-read manner. He uses research reports and trade magazines, interviews industry experts to identify trends in the oil and gas industryand writes about them in a public blog. He then finds investments that make money based on that information. Company information is shared only with Oil & Gas Investments subscribers in the Bulletin. They see what he's buying, when he buys it and why.

Legal Disclaimer: Under no circumstances should any Oil and Gas Investments Bulletin material be construed as an offering of securities or investment advice. Readers should consult with his/her professional investment advisor regarding investments in securities referred to herein. It is our opinion that junior public oil and gas companies should be evaluated as speculative investments. The companies on which we focus are typically smaller, early stage, oil and gas producers. Such companies by nature carry a high level of risk. Keith Schaefer is not a registered investment dealer or advisor. No statement or expression of opinion, or any other matter herein, directly or indirectly, is an offer to buy or sell the securities mentioned, or the giving of investment advice. Oil and Gas Investments is a commercial enterprise whose revenue is solely derived from subscription fees. It has been designed to serve as a research portal for subscribers, who must rely on themselves or their investment advisors in determining the suitability of any investment decisions they wish to make. Keith Schaefer does not receive fees directly or indirectly in connection with any comments or opinions expressed in his reports. He bases his investment decisions based on his research, and will state in each instance the shares held by him in each company. The copyright in all material on this site is held or used by permission by us. The contents of this site are provided for informational purposes only and may not, in any form or by any means, be copied or reproduced, summarized, distributed, modified, transmitted, revised or commercially exploited without our prior written permission.