How a Drilling Ban Hurts the Little Guys

"While the world waits for oil to stop gushing from the ocean floor, Americans wait to return to work."

While the world waits for oil to stop gushing from the ocean floor, a large group of Americans are waiting to go back to work.

Offshore drilling has been shut down since the Deepwater Horizon accident in mid-April that claimed 11 lives and started the massive Gulf of Mexico spill. The longer it lasts, the more damage it will do to America's energy sector. 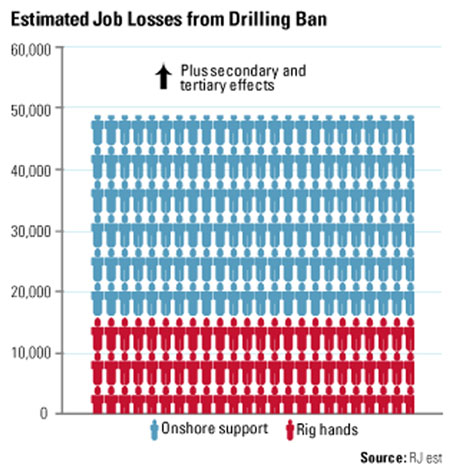 Each of the 33 deepwater rigs operating in the Gulf prior to the drilling ban employed roughly 1,500 people and generated $1 million a day in economic activity, according to estimates by energy analysts at Raymond James. If the moratorium lasts a full year, the result could be a $12 billion drop in GDP and a loss of 50,000 jobs.

These are well-paying jobs, especially for the region. The typical support and lower-level workers earn up to $4,000 a month, and specialized positions pay well more than double that amount, according to the New York Times. In all, the idled rigs represent at least $165 million in monthly wages.

These workers, not Big Oil, are the ones bearing the brunt of the drilling ban and the politicking in Washington. It's an inconvenience for ExxonMobil, Chevron and other major oil producers, but they can turn their attention to opportunities off Brazil, West Africa or Southeast Asia and come back when things settle down. The smaller companies that service and supply these rigs (and employ most of the workers) won't be able to follow.

Laborde Marine, a service boat operator in the Gulf, wrote to Louisiana Sen. Mary Landrieu and Gov. Bobby Jindal to beg them to rethink the moratorium, which has idled the company's 21 vessels. More than 4,000 deepwater wells and 700 ultra-deepwater (depths of over 5,000 feet) wells have been drilled in the Gulf of Mexico without environmental consequence, Laborde's executives pointed out. They called the moratorium "kneejerk."

Beyond the jobs and affected businesses, the moratorium stands to have a significant impact on energy supply. Deepwater wells accounted for 80% of total production in the Gulf of Mexico in 2009 and nearly 25% of total U.S. production. The deepwater Gulf accounted for almost half of non-OPEC production growth in 2009.

Raymond James estimates that a 12-month moratorium will reduce U.S. production by 400,000 barrel per day. This would cancel out the expected 2011 production growth for Canada and Brazil combined.

In addition, reserve estimates for the outer continental shelf represent 60% of the oil and 40% of the natural gas resources remaining in the United States, according to the Minerals Management Service (MMS).

There's no doubt that the U.S. has to make sure the proper safeguards and government oversight is in place to prevent future environmental disasters. But a moratorium that strangles an industry that supports an entire region of the country would just create a second disaster. Two wrongs don't make a right.

The following securities mentioned in the article were held by one or more of U.S. Global Investors family of funds as of March 31, 2010: Chevron, Exxon Mobil.