India is on the verge of the second-greatest urban migration the world has ever seen.

McKinsey Global Institute (MGI) believes India is on the verge of the second-greatest urban migration the world has ever seen. In their new report India's Urban Awakening, MGI says India's urban population could balloon to 590 millionnearly twice the size of the United Statesby 2030. 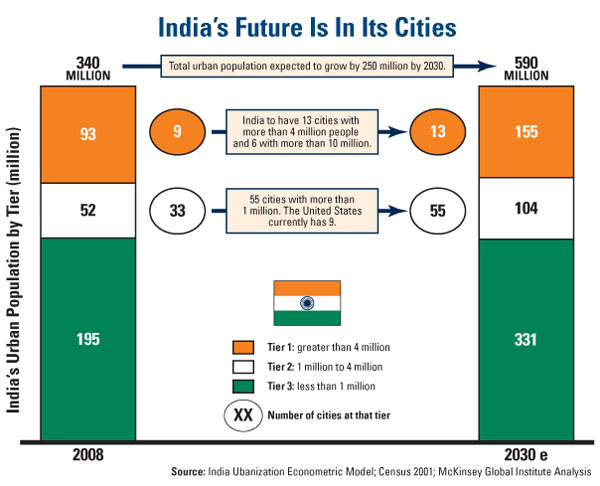 MGI says the Indian economy is expected to be five times greater by 2030, with urban centers being the key driver of this growth. It projects India's labor force to increase by 270 million70% of that coming from urban jobs.

This new labor force will also be relatively young compared to other BRIC countries. The median age for the Indian population is 25.3 yearslower than Brazil (28.6 years) and well below China (34.1 years) and Russia (38.4).

In order to meet the needs of this urban class, MGI estimates India will need:To put these figures into perspective, the investment amount needed is about one-third of India's total GDP in 2009. And if 700-900 million square meters of real estate sounds like a lot, that's because it is. India would need to build a city the size of Chicago every year for the next 20 years in order to create enough commercial/residential space.

While these numbers are staggering, perhaps the most important figure for commodity demand is MGI's projections on the growth of India's middle class. MGI estimates that India will have 91 million middle-class households by 2030, that's more than a 300% increase from the 22 million they have today.

As we've said many times before, the growth of the middle class in the developing world, especially in Asia, is a key driver of demand for oil, steel, copper, cement and countless other resources because the wealthier these people are, the more they will consume.

This mass of people will likely demand better housing, better roads, better goodsin all, a higher quality of life than what's been available to them in the past. The resulting pressure this could have on commodity demand is the X-factor that we believe makes this cycle different than anything we've experienced in the past.

By clicking the link above, you will be directed to McKinsey's website. U.S. Global Investors does not endorse all information supplied by this website and is not responsible for its content. BRIC refers to the emerging market countries Brazil, Russia, India and China.