They're onto something new now, and it makes everything that came before it looks like practice. . .

Investment revelations can come at the strangest moments.

This one happened just a few weeks ago. . .

I was flying down to Miami for the weekend, to visit an old venture capitalist buddy of mine who'd been nagging me to come see his new motor-yacht like it was the newborn heir to his fortune.

I'd checked in late and had been given the window seat. As we neared departure time, however, and the seat next to me remained unoccupied, I started to get hopeful that I may have hit the air travel equivalent of the lottery: the empty row.

The guy materialized at the last minute before push-off, cutting me off from the freedom of the isle that had almost been in my grasp.

He was older, in his early-to-mid sixties; well past the threshold of morbid obesity and at least four martinis deep as he plopped himself down in the barely sufficient business-class seat.

I leaned up against the side of the fuselage, found a nice cozy corner on which to rest my head and proceeded to play dead.

"You'd better watch yourself, closing your eyes in public like that."

My heart sank. Dear God, he was one of those. . .Maybe if I just kept pretending he wasn't there.

"Yeah, you heard me. . ." He mumbled on. "You keep your head in the sand and they'll take the clothes right off your back."

I opened my eyes slowly, gave them an overdramatized little rub and responded: "I don't think they let thieves onto these flights, sir.

"If you think that, son, you've got your eyes glued shut," he said, filling the air between us with stale vermouth fumes.

I fought the urge to roll my eyes.

"Ten years from now," he said, massaging his temples. "They'll own everything."

I figured I had at least half an hour of this to endure before time and the cocktails knocked him out. . .

But as he kept talking to meagainst all oddssome of it actually started to seep into my brain. Gradually, I started to understand what he was trying to say.

I can't tell you his name (as it would have serious implications for him and his long list of clients), but this fat old drunk was actually a very successful commodities trader.

With over 40 years in the business, he'd been there to see the Hunt Brothers' play for a silver monopoly back in the late '70s; the gold collapse of the early '80s; the copper run-up between the '80s and 2000s; the uranium boom and bust; and a number of other major events that made and broke fortunes across five continents.

"I've never been this nervous," he said to me as we reached cruising altitude. "They've finally realized what kind of weight they can throw around and they're doing it. Who knows what's gonna be next. There's almost nothing left for them to hoard."

He wasas so many in the financial sectors are these daystalking about China. Specifically, he was talking about what they were doing to the global metals industry. It was no news to me, of course; but to see a seasoned, professional investor losing his marbles over it was a bit disconcerting. . .

Was I not nervous enough? The answer is yes.

No investor that I know todaynot my VC friend with the new $4.7 million boat, or anybody I work with, or any of the dozens of industry insiders I speak to on a daily basisis nervous enough about the recent moves the Chinese government has been making in regards to some of the most important metals known to modern industry.

Or if they are, they're certainly not showing it.

Here's a quick synopsis of how the world's fastest-growing economy gobbled up a majority of our most critical elements with hardly a peep from Western powers:

It began with rare earth elements and lithium in the early '90s. Essential in small quantities to almost all electronics, but required in large quantities in the production of high-capacity batteriesnamely those that go into every single hybrid car on the road todayrare earth elements were destined to become one of the "new oils" in a post-fossil fuel world.

And the mining companies that produced these metals were to China what shrimp are to whales. By the time their decade-and-a-half long buy up was done sometime in late 2009, the Chinese had grabbed up 97% of the world's known rare earth deposits. 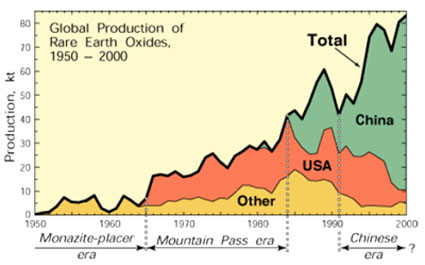 Inevitably, as their monopoly finally started to reach its current level in the first years of the decade, prices for rare earths and lithium rose.

In just the past five years, neodymium (another rare earth used heavily in rechargeable batteries) has shot up nearly 400%. A drastic change. . . and it all has to do with the Chinese appetite. 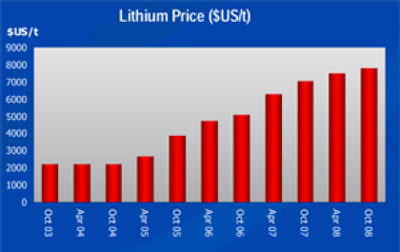 Unfortunately, consumption rose right along with those prices; and the ultimate aim of this whole plan was gradually achieved right under our nosesWestern dependence on what was increasingly a Chinese product, and the price control that came with it.

It's happened before of course, with the cheap plastic products that flood into our shores every day.

But this time, the focus of the monopoly isn't PEZ dispensers or tennis shoes. The focus is the raw materials we need to keep our TVs and computers working, our cars running andmore and more every dayour precious electricity safely stored.

So now you understand what I mean by "not nervous enough." But here's the part that made me want to grab a couple drinks myself.

"They're onto something new now, and it makes everything that came before it look like practice by comparison. Hell, this plane wouldn't ever get off the ground without the crap they're grabbing up now."

And this is when his point finally hit me.

You see since 2004, China's been the world's dominant steel producer. With the annual production capacity of the next three biggest producers (the EU, Japan and the U.S. combined), just over one out of every three pounds of steel used for construction or manufacture comes from China.

That may not be news to anybody, but what you may not have known is that a key component of a vast majority of steel alloysnamely stainless and construction steelis on the verge of setting off the biggest steel shortage in history.

And just as they have in the past with rare earths and lithium, the Chinese have positioned themselves to keep as much of what's left as they possibly can.

It's called molybdenum (muh-lib-dih-num), and ever since its first use in the legendary curved blades of the Samurai warriors, it's been an integral component of steel alloys.

Chances are, if the part in question has to resist strain, pressure, high temperature or torque, it contains between 2% and 20% molybdenum.

This includes everything from engine blocks to oil pipelines to nuclear reactor cooling tubes to aircraft wings.

I guess you know where I'm going with this now. The Chinese, true to form, realized this early on and have become net importers of this crucial metal for the first time ever.

Net importers. . . that's a term that lately, when mentioned in the same sentence as China, has been a recipe for instant hives for anyone invested in steady, low prices of a given material.

Well, as major global suppliers replenish only 88% of the molybdenum consumed in 2010, JPMorgan expects prices to jump as much as 120%.

As the Chinese continue what may be the largest building boom in history, producing molybdenum-laden steel at a rate of 500 million tons per year (U.S. produces about 93 million tons annually), that 12% deficiency is expected to grow to a 38% deficiency within five years, doubling the price again.

By the time this gradually sobering trader got done telling me all this, I was almost dizzy. Thoughts were spinning through my head about the implicationsbut mostly, the opportunities this industrial deficit presented.

Before I knew it, the wheels were on the ground and the rainy, gloomy DC area air had transformed itself into the balmy near-tropical climate of South Florida.

Now I had two reasons to see my old venture capitalist buddyhis big expensive boat being the less urgent of the two by far.

The fact is molybdenum exploration mining can (and likely will) become the growth industry of at least the first half of the 21st century. Because with highly specialized, high-stress applications flooding into production each year, the market for non-molybdenum steel alloys is actually shrinking in relation to alloys dependent on the additive.

And with Chinese hunger for the material expanding even faster than the nation's economy (domestic steel production may hit 596 million tons in 2011a 19% increase), prices have nowhere to go except up.

Again, I wish these were all just my theories. The fact is, however, the pattern has been established for over a decade and a half.

There simply is no other choicenot for the companies; not for the Western economies that, each year, become more and more reliant on Chinese steel; and definitely not for the consumer.

When I told my old buddy all this, and after a quick few keystrokes on the satellite-connected computer terminal he kept on his yacht, he got up, lit a cigarette and walked into the bar to make himself a stiff drink.

Then he said something that made me even more nervous.

But this time, it was the good kind of nervousthe kind of nervous I get when I know I'm on the verge of nailing down a major new investment strategy.

"You know what, man?" he said in his slight Mediterranean accent. "I wish you'd told me all this a couple of weeks ago."

"Because," he chuckled, running his hand over the polished mahogany bar top, "if I'd known. . .I would have gotten a bigger boat."

P.S. On my way home from Miami, there was one thought that wouldn't leave my mind and it had nothing to do with multimillion-dollar boats: How are we going to make this once-in-a-lifetime shot work for us

And now we've found our answer: One North American outfit can land you profits of up to 2682% and beyond. . .Learn more about the tiny mining company tapping into a $60 billion deposit of one of the most crucial metals ever discovered.