SAID IT BEFORE, but we'll say it again.

The bull market in gold starting 10 years ago is about much more than the dollara fact that investors and savers worldwide might want to consider in 2010 if the U.S. currency continues to rally. 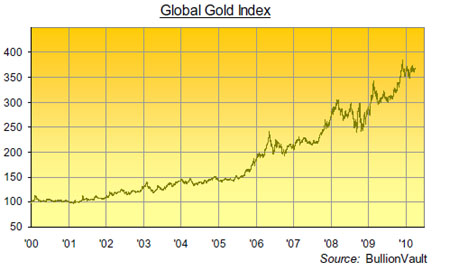 The GGI then includes the price of gold in British Pounds (5%), Russian Roubles (3%), Brazilian Real (3%), Canadian dollars (3%), Indian Rupees (3%) and finally Mexico Pesos (2%). . .thus covering well over two-thirds of the global economy and more than half its population.

Its value? Think of the GGI as gold minus the noise. The index is significantly less volatile on a daily basis than the gold price in dollars, Euros or Sterling alone. It shows you what's happening to the price of metal overallrather like you might track the dollar Index to see how the greenback's doinginstead of focusing solely on one single pairing.

And it's telling us. . .?Our guess here at BullionVault is that this loss of purchasing power in cash and bank-savings worldwide would require strong, positive real rates of interestafter inflationto reverse it.

Formerly City correspondent for The Daily Reckoning in London and head of editorial at the UK's leading financial advisory for private investors, Adrian Ash is the editor of Gold News and head of research at BullionVaultwinner of the Queen's Award for Enterprise Innovation, 2009where you can buy gold today vaulted in Zurich on $3 spreads and 0.8% dealing fees.

Please Note: This article is to inform your thinking, not lead it. Only you can decide the best place for your money, and any decision you make will put your money at risk. Information or data included here may have already been overtaken by eventsand must be verified elsewhereshould you choose to act on it.