Gold Is De-Coupling from the Dollar:Euro Exchange Rate

Further to our piece on the euro:dollar Exchange rate last issue, we have found that the topic, at last, is hitting mainstream.

This is a snippet from the Gold Forecaster. The newsletter that covers all pertinent factors affecting the gold price [with a 95% accuracy rate].

Further to our piece on the euro:dollar Exchange rate last issue, we have found that the topic, at last, is hitting mainstream. It is always difficult to be weaned off what you thought was a reliable formula giving you the inside track on the gold price. The oil:gold relationship was a case in point. Many tried to use it as a measure of the next gold price. But in the case of the euro:dollar exchange rate dictating the direction of gold the consequences of following this line will shortly prove to be very expensive for Traders on COMEX and elsewhere.

As you saw from the chart of the euro gold price since 2001, and particularly from 2005 [when it was becoming apparent that European Central Banks were faltering in their determination to sell gold] the euro price of gold began to rise. But this was nowhere near enough to halt the link of the gold price to the euro. Even today short-term moves come about by a move on this rate. This will only slowly diminish as the crises facing both the Eurozone and the U.S. dollar increase in severity. We are seeing an acceleration of that now, with Greeces problems persisting and Spain waiting to enter center stage.

Why did the relationship between the dollar, the euro and the gold price come about?

The euro was formed in 1999. Why? The use of the dollar in all global transactions became unsatisfactory as the currency of the burgeoning Eurozone and the alternative routes of its own currency became attractive to Europe. Under its wing, the currency should have united, at least financially, most of Europe. After all it should have reflected the economy of Europe overall, whereas the U.S. dollar reflects the economy of the U.S. [even though it is used in most global transactions] and is irrelevant to that of Europe. So another global trading bloc introduced its currency independent of the dollar [bear in mind that the dollar was not replaced in Europe, local currencies were], one large enough to set up an alternative measure of value. Since then its value against the dollar has moved from 1:1 to 1:1.5 at its worst. 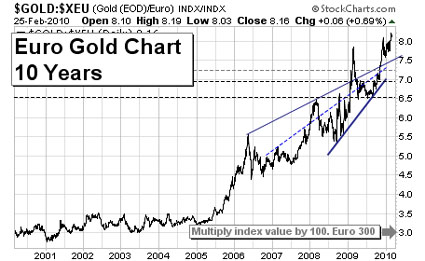 This is over 10 years. It does reflect the profligacy of the U.S. currency and highlighted that the U.S. has been paying bills (to the extent of its trade deficit) with currency and not goods [only a balanced Trade account would do that]. This is only abnormal when this goes on and on and no effort is made to correct matters, as is the case in the U.S. So it seems fair that a bloc like the Eurozone with a healthy balance of payments should be a good measure of the dollar. Since then little has been done to rectify matters, hence the steady ongoing decline of the dollar against the euro.

As worries about the parts of the Eurozone grow, the euro is losing its reliability as a constant measure of value. When the Eurozone was conceived no room was made for a loss of sovereignty. The Union was united for trade and finance alone. Yes, there is a European Parliament, but national government and national interests will always be preferred to Eurozone interests. The problems facing Greece and in the future Spain, France, et al will mature to bring down the euro in time. After all it was the benefits to each nation on the financial front that brought them all together. Becoming like the States, under one government, was not considered. With a rich, productive, efficient North and a poor Tourist-oriented South in the Eurozone, it was only a matter of time before the pressures were felt under one currency. In the past strong currencies revalued and discouraged the flow of capital from poor to rich nations. As the capital left these nations and their internal inefficiencies rose to the surface poor nations began to over-borrow despite the fact that nothing would change in the future. A crisis was in the making. Its now here and there is a perceptible unwillingness to support each other in all seasons, but only in fair weather, it seems. Trouble is that the pressure will grow under one currency, not diminish.

So why refer to the dollar:euro exchange rate for the gold price?

As you can see there never was a good case for the link of the euro to the gold price. But it has taken the internal national problems within the zone to knock confidence in the euro, for this to become visible. Looking ahead, it would seem that the Eurozone problems will not go away until there is a mechanism for leveling the playing fields between rich North and poor South. Dont think for one moment that the rich will give handouts to their poor brothers in the South to achieve this on an on-going basis. The Southern nations are breaking Eurozone entry rules and must pay the penalty! How can the euro bear up under these fixed currency problems? In short, it cant. As for the gold price, it must walk its own road, no matter whether the euro or the dollar is rising.

A trip back to basics is needed here. What common ground does gold have with the either the dollar or the euro? None! Gold has no politics, it has no nationality, but it does have a respected value when times are dire. Paper currencies lose value in these times. Ask yourself, why did President Roosevelt deem it necessary to confiscate gold in 1933 then devalue the dollar against it in 1935 [apart from engineering the acquisition of foreign held gold]? As Greenspan put it in his early days, gold is money in extremis In wartime all nations and governments respect gold. It does measure value, even when it is not a means of exchange. The skill is in determining when extreme times are with us. Bear in mind the war did not start until 1940 in the U.S. but the gold confiscation measures were taken after the Depression [plus banking crisis] had been going for four years. Todays pattern may well not be too far short of that [and in place of a rising Germany [economically] you now have a rising China [economically]. Look back to the end of last century [1999] and then at now, havent times changed?

At the moment, as the dollar rally falters and the euro weakens, a strange stability is given to the dollar:euro exchange rate as they glide down together. The behavior of the gold price is beginning to testify to that. But as slow as a tidal change is to the sea, with the waves keeping up their constant coming and going, so the institutions and traders in the gold market will move away from the dollar:euro link.

Impact on the Gold Price
Subscribers only