What's Next for the Dollar?

The Federal Reserve's Open Market Committee (FOMC) is sticking to its course for phasing out the additional purchases of Mortgage Backed Securities (MBS). Notably however, in its statement released January 27th, reference to an improving housing market was omitted after recent bad news about the sector.

The Fed rarely puts much weight on a month's worth of data, be they good or bad; few have ever accused the Fed of being "ahead of the curve." Indeed, there was one dissenting vote, Kansas City Fed President Thomas Hoenig, who argued the Fed should no longer commit to "exceptionally low levels of the federal funds rate for an extended period."

But what if the housing market does not recover? In our assessment, Fed Chairman Bernanke has made it abundantly clear that he believes a recovery in the housing market is key to putting the economy back on a sustainable growth path. With millions of homeowners "under water" in their mortgage, i.e. owing more on their homes than they are worth, we believe he has a keen interest to push home prices higher. In the past, he has testified in Congress that going off the gold standard during the Great Depression allowed the price level to rise to the pre-1929 stock market crash level and was instrumental to get economic growth back on track.

Having said that, the Fed risks losing credibility if the MBS purchase program were to be re-started or extended, after clearly signaling that the program will be phased out. In the near term, we believe the Fed is likely to sit back and wait. That's because the Fed may truly believe that after "printing" close to $2 trillion dollars, the economy will recover. However, we believe the Fed may be underestimating the headwinds caused by market forces that warrant further de-leveraging; conversely, in our opinion the Fed is overestimating the impact of fiscal and monetary stimuli. The stimuli, in our assessment, have been extremely inefficient: on the fiscal side, programs like cash-for-clunkers do little more than provide a short-term reallocation of spending. On the monetary side, the Fed's programs have mostly substituted rather than encouraged private sector activity. For example, when the Fed offered commercial paper to GE at the height of the crisis, no private sector participant was able to effectively compete. Inefficient monetary and fiscal programs mean that a lot more money may need to be spent and printed to achieve what policy makers would like to achieve. Amongst the unintended consequences caused by such policies may be a weakening of the U.S. dollar; that's because the purchase of government bonds and mortgage backed securities pushes rational investors  domestic and foreign  abroad in search of prices set by the market, not regulators; however, consider that this consequence may not be unintended. When it comes to a weaker dollar, policy makers have to be careful not to get more than they are bargaining for. It is no coincidence that European Central Bank (ECB) President Trichet often reiterates that it is extremely important that the U.S. is committed to a strong dollar policy.

When the Fed buys securities, they are added to its balance sheet; we talk about the Fed's balance sheet as a proxy for the money that has been "printed" because such purchases require little more than a few keystrokes on the Fed's computers. The phrase creating money out of thin air is an appropriate description of the process. While the Fed seems at ease creating money, in its 100-year history, the Fed has never substantially reduced its balance sheet. When economists talk about containing inflation, rarely do they mean going back to the lower price level of a former era: they talk about leveling off at a higher plateau; actually, plateau may also be a misnomer considering that many modern economists equate an inflation rate of 2% with price stability.

The reason why the Fed may likely sit back and wait through the near term is that monetary policy typically takes 69 months before impacting the real economy. This is not the first time the Fed has taken a breather since the crisis began: while the Fed's balance sheet more than doubled, from a pre-crisis level of about $800 billion, by the end of 2008, there was little net activity in the subsequent six months. 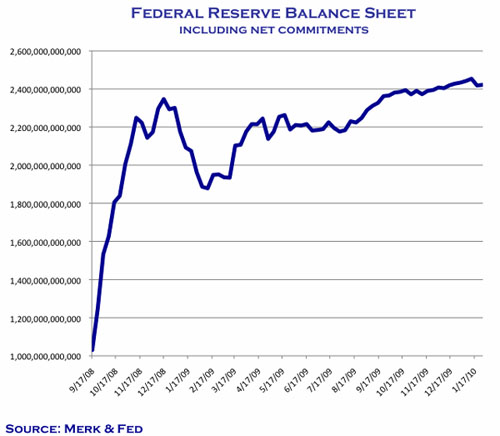 Some early emergency programs were phased out, while new ones were being ramped up. For purposes of the money that has been created, it doesn't matter whether the Fed buys government bonds, mortgage backed securities, typewriters or pays wages to its staff, for that matter. The $1.25 trillion mortgage-backed securities program, while it was started in the spring of '09, only had a net impact on the Fed's balance sheet starting the summer of '09. The chart illustrates the evolution of the Fed's balance sheet (we include the Fed's net commitments to buy MBS in the aggregated total).

Now consider the scenario that the renewed weakness in housing is more than a glitch, but the beginning of a new downturn. Credit conditions may continue to be tight in the private sector, and the Fed's absence as an MBS buyer may push the cost of borrowing up for everyone. Some government programs have also tightened standards. Bernanke has emphasized that his lending programs constitute credit easing with their primary purpose to lubricate the financial system. He believes that giving support to a specific sector of the economy is more efficient than buying government bonds. This experiment, in our view, has been a grave mistake: providing money to a specific sector of an economy is fiscal, not monetary policy. By veering into the domain of Congress, he has drawn their ire and attention; political scrutiny of the Fed erodes the Fed's credibility, making it less effective. The most effective Fed policy is one where a Fed official utters a few words and markets move; emergency rate cuts, printing trillions of dollars are signs that Fed policy has become less and less effective.

If one takes Bernanke at his words, he will not return to buying mortgage-backed securities to support the housing market merely because rates are moving up. Given that these markets are "functioning" (market forces would drive down home prices), credit easing should not be an option that is on the table. The alternative? A jolt of quantitative easing, i.e. the purchase of government bonds as pioneered by Japan in an effort to drive down the cost of borrowing. While we don't consider either credit easing or quantitative easing to be sound monetary policy, there is an argument to be made that credit easing is redundant because the Fed is typically only buying very high quality securities and given the interdependency and substitution effects, buying government bonds is not so different from buying other highly rated securities, in particular government guaranteed agency mortgage backed securities. What makes this course of action even more likely is that a "jolt" of quantitative easing may be a more palatable option to a broader base at the FOMC than credit easing. Curiously, while we believe quantitative easing has not achieved its goals in Japan, the Fed and Bernanke appear to point to Japan as an endorsement of quantitative easing.

A big risk associated with quantitative easing is that the market considers central bank purchases of government bonds as a way to finance government spending. Contrary to the apparent newly discovered fiscal discipline in Washington, we very much doubt the spending will abate. Quantitative easing is rather risky, especially for those countries dependent on foreign investment to support their currency (such as the U.S.), as countries whose central banks print money to finance government spending are at risk of seeing a flight out of their currency. But maybe that's the jolt Bernanke ultimately desires as any inflation on the backdrop of a weaker dollar may push up home prices yet again.

So if the Fed pauses, should investors wait before taking action? As far as we are concerned, gold has risen from about $250 an ounce to over $1000 an ounce; the dollar has been in a decline versus the euro since briefly after the euro's inception. The dollar's recent rally may provide an opportunity to diversify out of the dollar, given the risk that the scenarios we describe play out. Can the dollar rise while the Fed pauses and other market observers believe the Fed will toughen its stance and mop up the liquidity, even if housing is crushed in the process? That's certainly possible too. We hope our discussion helps investors assess the risks and plan accordingly. We would like to remind investors that nothing has really played out in this crisis the way our policy makers have wanted it to. The late Wim Duisenberg, former head of the ECB, once said he hoped and prayed the global adjustment process will be slow and gradual. As we have mentioned in the past, when central bankers revert to hopes and prayers, investors may want to consider taking action.

Manager of the Merk Hard, Asian and Absolute Return Currency Funds, www.merkfunds.com Axel Merk, President & CIO of Merk Investments, LLC, is an expert on hard money, macro trends and international investing. He is considered an authority on currencies.

The Merk Absolute Return Currency Fund seeks to generate positive absolute returns by investing in currencies. The Fund is a pure-play on currencies, aiming to profit regardless of the direction of the U.S. dollar or traditional asset classes.

The Merk Asian Currency Fund seeks to profit from a rise in Asian currencies versus the U.S. dollar. The Fund typically invests in a basket of Asian currencies that may include, but are not limited to, the currencies of China, Hong Kong, Japan, India, Indonesia, Malaysia, the Philippines, Singapore, South Korea, Taiwan and Thailand.

The Funds may be appropriate for you if you are pursuing a long-term goal with a currency component to your portfolio; are willing to tolerate the risks associated with investments in foreign currencies; or are looking for a way to potentially mitigate downside risk in or profit from a secular bear market. For more information on the Funds and to download a prospectus, please visit www.merkfunds.com.

Investors should consider the investment objectives, risks and charges and expenses of the Merk Funds carefully before investing. This and other information is in the prospectus, a copy of which may be obtained by visiting the Funds' website at www.merkfunds.com or calling 866-MERK FUND. Please read the prospectus carefully before you invest.

The Funds primarily invest in foreign currencies and as such, changes in currency exchange rates will affect the value of what the Funds own and the price of the Funds' shares. Investing in foreign instruments bears a greater risk than investing in domestic instruments for reasons such as volatility of currency exchange rates and, in some cases, limited geographic focus, political and economic instability, and relatively illiquid markets. The Funds are subject to interest rate risk which is the risk that debt securities in the Funds' portfolio will decline in value because of increases in market interest rates. The Funds may also invest in derivative securities which can be volatile and involve various types and degrees of risk. As a non-diversified fund, the Merk Hard Currency Fund will be subject to more investment risk and potential for volatility than a diversified fund because its portfolio may, at times, focus on a limited number of issuers. For a more complete discussion of these and other Fund risks please refer to the Funds' prospectuses.

This report was prepared by Merk Investments LLC, and reflects the current opinion of the authors. It is based upon sources and data believed to be accurate and reliable. Opinions and forward-looking statements expressed are subject to change without notice. This information does not constitute investment advice. Foreside Fund Services, LLC, distributor