"This purchase increases India's official gold reserves by more than 55% to 557.8 tons."

In a surprising move the IMF announced Tuesday it had sold 200 metric tons of gold to India in the last two weeks, valuing the sale at $6.7 billion or 4.2 billion Special Drawing Rights (SDR).

The Reserve Bank of India had last released gold holdings of 357.8 metric tons as of March 2009. This purchase increases India's official gold reserves by more than 55% to 557.8 tons.

According to the release India bought the hoard at daily market prices. The sale was executed directly after gold's new record of $1,072 per ounce on October 14, according to Bloomberg figures. 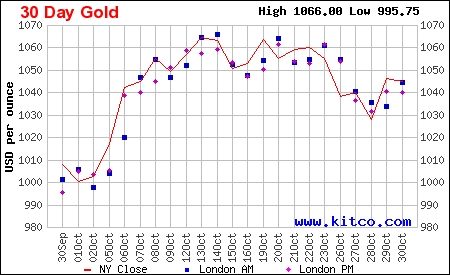 The IMF has now sold half of the intended sales volume of 403 tons, announced jointly with the latest Central Bank Gold Agreement (CBGA) in August. It will now be most interesting to see who will grab the other 203 tons. Both Russia and China had announced in March that they will put a higher emphasis on gold reserves as a share of total Forex reserves. Both countries have satisfied their demand from domestic production so far. China has become the biggest gold producer in the world, mining more than 300 tons of gold annually, outpacing energy-strapped South Africa.

"This transaction is an important step toward achieving the objectives of the IMF's limited gold sales program, which are to help put the Fund's finances on a sound long-term footing and enable us to step up much-needed concessional lending to the poorest countries."

The IMF is eager not to unsettle gold markets and will probably sell the remainder directly to central banks, it said.