Back to School with a Bump

So you get back after Labor Day as summer ends, and what do you find...? Deposit accounts are still paying zero, the stock-market's trading way above its average price-earnings ratio, housing could have another 15% to fall before finding rock bottom, and central bankers would be drowning in ink if they didn't use photons to create money instead.

Buying gold appeals most when everything else fails to hold value...

SO YOU GET BACK after Labor Day as summer ends, and what do you find...?

Deposit accounts are still paying zero, the stock-market's trading way above its average price-earnings ratio, housing could have another 15% to fall before finding rock bottom, and central bankers would be drowning in ink if they didn't use photons to create money instead.

Little wonder a small but growing number of private investors want out.

"With this current crisis, and all the money that's being printed, gold looks a sensible thing, more stable than currencies," said one BullionVault user in a call on Tuesday. It's a hedge against holding cash..."

"For now, I'm as sure as I can be [in gold] that my money is safe," said another. "The stock-market rally looks like fool's gold to me. There's no real value being created. I don't believe cash will be useful either. We're printing more money than the Weimar Republic, and that's got to have an impact at some point."

Buying Gold appeals most when everything else fails to hold value. Hence the panic of late 2008...a flood of new money into coins and small bars that pushed premiums so high, buyers need a 10% move just to break even as we explained to CNBC this morning.

Getting in before that failure strikes, in contrast, soon looks a smart move in hindsight. Your risk is buying the top, and forecasting a panic ahead that never shows up. 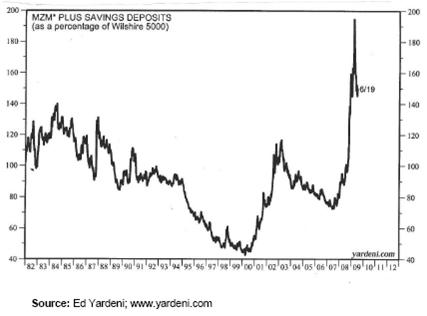 "Mr.Bernanke is the greatest money-printer in history," said Asia-based Swiss investment advisor and manager Marc Faber in a webcast for US Global Investors on Wednesday.

Noting the huge leap in US cash and cash-savings relative to the current value of stocks  as in the chart above  "All that money has to go somewhere," he said. And yes, it may well go into stocks; the German hyperinflation of 1919-23 saw Berlin equities rise more than 340,000 times over.

Armageddon aside, however, even Jim Cramer knows that stock-markets bulls get slaughtered by inflation sooner or later. But what he might not notice  unlike foreign investors  is the real loss of purchasing even a rising stock-market can deliver when the currency craters. And this decade's bull market in gold, rather than simply signalling a decline in the Dollar, has in fact come against all currencies...rising three-fold and more versus the world's major moneys.

So far, investors still remain underweight for anything like a true "crisis" peak, meantime. Bullion and coin were reckoned (by the World Gold Council) to be around 0.7% of world financial assets at the end of last year. That ratio stood nearer 5% in the late 1960s. It reached 20% and more in the early 1930s and '80s.

Put another way, "Is gold still in a bull market?" as John Hathaway of Tocqueville Asset Management asked in October '08...back when the price of bullion had dropped 15% from its Bear Stearns peak...but hadn't found its floor, a further 23% lower still by month's end.

"The question seems absurd," Hathaway answered himself. "It is tantamount to saying that paper currencies have bottomed out and that the coast is now clear for financial assets."

Formerly City correspondent for The Daily Reckoning in London and head of editorial at the UK's leading financial advisory for private investors, Adrian Ash is the editor of Gold News and head of research at Bullion Vault winner of the Queen's Award for Enterprise Innovation, 2009  where you can Buy Gold Today vaulted in Zurich on $3 spreads and 0.8% dealing fees.

Please Note: This article is to inform your thinking, not lead it. Only you can decide the best place for your money, and any decision you make will put your money at risk. Information or data included here may have already been overtaken by events  and must be verified elsewhere  should you choose to act on it.