If the U.S. and global economies take the short path, another market meltdown will hammer everything again, even assets that "should" do well in that context, like gold. Any correction in gold would be temporary and create spectacular buying opportunities.

Before last falls crash, our economic views here at Casey Research were regarded by many in the mainstream as being extreme and alarmist. Unfortunately, they were also another thing: correct.

Predictably, having been proven right hasnt changed anything; Wall Street still pooh-poohs us as being part of the lunatic fringe. But thats okay; while the Suits are wondering if they can back-date their stock options far enough if the economy doesnt recover, we are poised to profit whether it does or doesnt.

Personally, I think the U.S. economy has decayed from dead-man-walking status to that of a zombie in the grave. The jury is still out on whether or not the zombie will rise and stumble on for another year or two. That introduces a lot of uncertainty into the markets now, with everyone unsure of what will happen next.

The reality is, beneath all the bravado, that no one is ever sure of what will happen next. And the fools who proclaim certainty should be treated kindly, not left unsupervised around sharp objects, and never trusted with money.

But there is one thing were very confident of: if the zombie rises, it wont be real life we see.

In other words, there is no credible scenario in which the efforts of the U.S. and other world governments to cure the global economic crisis will succeed, not before the mistakes from the past are liquidated. With increasing doses of the same bad medicine that caused the illness in the first place, how could it? You cant make bad medicine work better by prescribing more  but if you believe the patient just needs a stronger dose, youll keep trying. And there can only be one result: dead zombie.

Before the zombie gives up the ghost, however, it may show signs of rosy life  but it will just be lipstick, not the healthy flow of living blood. Though an imitation of a thriving economy is all it will be, it could be a very impressive likeness.

Abandoning my gruesome metaphor, Id say we are approaching a fork in the economic road. Both paths before us lead to continued liquidation of decades of bad economic decision-making, differing only in how long it takes to get there. The short path drops sharply downward from here, with the decline perhaps triggered by another round of depressing economic news. This is what happens if the various stimulus and rescue plans simply dont work, deflating the Obama Rally.

The longer path takes us through a reflationary boom for the record books. In this scenario, the stimuli work, a last hurrah for the old economic order. And in the end, the artificially simulated (not stimulated) good times will have created an even more gargantuan level of ill-advised consumption, unnecessary construction, and massive misallocation of capital  all charged to an already maxed-out MasterCard.

The near term is the hardest to predict, but there are good reasons to assign additional weight to the probability of an imminent correction.

If the U.S. and global economies take the short path, another market meltdown will hammer everything again, even assets that should do well in that context, like gold. Any correction in gold would be temporary and create spectacular buying opportunities.

If its the long path, a delayed Shopping Season may set in (normally, its Sell in May and go away), and with the market so jittery, it could be a vicious one this year. With a lot of money still on the sidelines that wants to be reinvested, and people desperate to believe things will get better, the Obama Rally could go on for another month or so, but it seems likely to us that it wont last much more than that, even if the resulting correction is followed by the longer paths reflationary boom.

Long path or short path, either seems to lead downward in the near term (if only for a few months, initially, in the case of the longer path). Yet, no one can say that precious metals wont be surging higher as you read this, or next Monday, or next week I have no crystal ball with which to read the future  but barring an immediate and major breakout in gold, Im inclined to expect a short-term weakness in the junior mining sector, followed by continued recovery and growth among the quality companies with solid fundamentals. 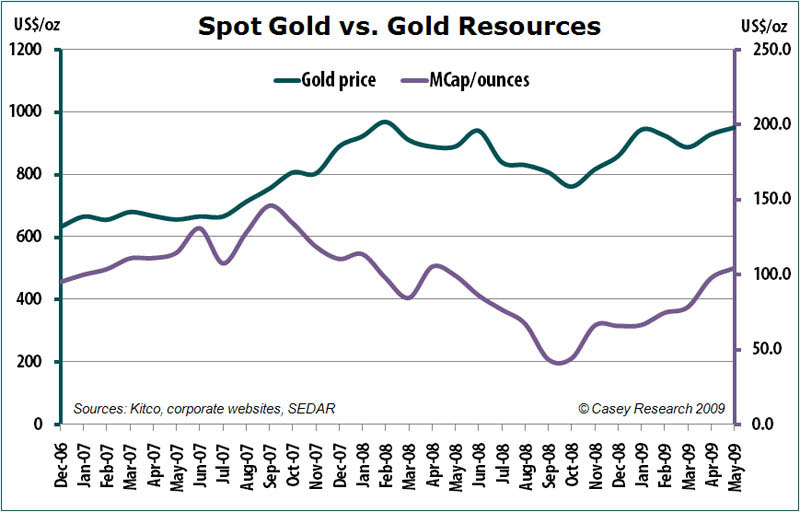 Why should anyone continue to own these volatile shares if a short-term correction seems likely? Aside from possibly missing a sudden and decisive jump in gold (and silver) prices, consider that most companies assets are selling cheaper.

Take a look at this chart showing the spot price of gold and the dollars per ounce in the ground the market has been willing to pay among junior miners and explorers.

Note that the left and right axes are scaled differently. This magnifies the effect, to better show the widening gap between the two over the last two years, but its real.

Heres the same divergence for silver: 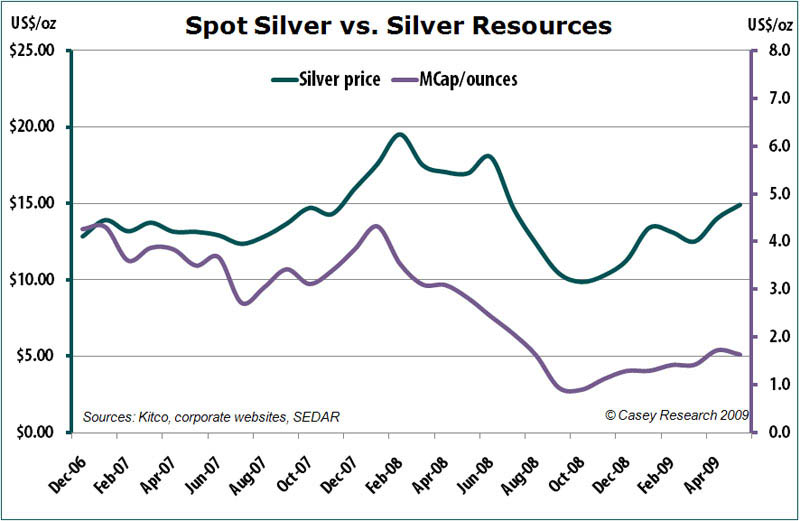 This silver chart supports our bullish call on silver last month. The per-ounce price of gold in the ground has not kept up with spot gold, but it is close to being back to its level before the credit crisis started heating up in 2007. Silver in the ground, on the other hand, is still close to the bottom hit last fall.

Short version: whether or not theres a correction just ahead, a jittery market has both gold and silver in the ground on sale, and thats an opportunity.

Owning physical gold and silver is a must in these uncertain times. But the real money-makers are select, high-quality junior mining stocks with sound fundamentals, enough cash on hand, and high-grade deposits that can propel the share price to the moon when the company hits paydirt. We call them Torontos Secret Gold Investments click here to take a look.