The End of the Credit Line (or, The Trouble with Gold, Part III)

The trouble with gold...? If you choose to use it as money, then you can only abandon it once. Once done, it's done forever. You can't keep floating the value of cash time and again.

"...To stay ahead of inflation, don't beg for a raise. Just borrow the money instead...!"

The TROUBLE with GOLD...? If you choose to use it as money, then you can only abandon it once. Once done, it's done forever. You can't keep floating the value of cash time and again.

Quitting the Gold Standard is a one-shot deal only. Unlike the Doctor in Kit Marlowe's Faustus, gold cannot be damned twice in Act One and then in every last scene that follows.

The fillip given to business, exporters and shopping is a one-shot deal, too  if it comes off at all. Britain's decision, for instance, to abandon gold altogether in 1931 sure looked a smart move from Birmingham southwards. By the mid-to-late Thirties, the UK enjoyed a house-building boom across the Midlands and Home Counties. But Northern ship-builders, however, missed out on the bounce, right up until the outbreak of WWII.

Across the Atlantic, debate still yawns today about Roosevelt's half-way house of 1933-35. Fearing no fear but Gold, he devalued the Dollar (down from 4.8% of an ounce to 2.8% of one ounce) and banned private "gold hoarding" to stop people looking after themselves. Did it boost prices, however? By 1938, the United States suffered a depression within depression. Economists in Washington were so shocked by the slump, they were forced to coin a new word  "recession"  to describe the phenomenon! 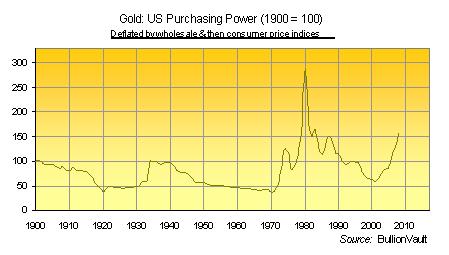 "The champion of free enterprise, Ronald Reagan, knew that growth of the private sector was in no small way dependent on deregulation and the lowering of tax rates," writes Bill Gross at Pimco.com.

"Now that those trends have necessarily come to an end, no rational investors should expect innovation and productivity to be unaffected. Profit and earnings per share growth will suffer."

De-regulation is just like abandoning gold, in that  even if it takes twenty years  you can only pull it off once. And is this trend towards loose lending and credit that "something" which we're now watching die, seven decades on from the bitter end of the international Gold Standard? Have we at last reached the end of the post-1970s settlement  non-stop inflation of money, enabled (and masked) by the non-stop de-regulation of credit and markets?

Second-round "effects" in this context, of course, would mean higher wage claims  the bête noir of central bankers worldwide. "It's very important that wage rises don't pick up to compensate for the rise in inflation," said Bank of England chief Mervyn King way back in 2005. "We must ensure that second-round effects and risks to price stability over the medium term do not materialize," said Jean-Claude Trichet, head of the European Central Bank (ECB), more than two years later.

Why not let wage rises...ummm...rise? Because the '70s inflation was so clearly the fault of too-powerful unions, all demanding above-inflation wage rises  and all-too often getting their money from union-backed politicians. Or so central bankers agree, picking up where Margaret Thatcher and Ronald Reagan left off. Curbing unionized labor would cost workers (and thus voters) their bargaining power in wage claims, threatening to curb real living standards as the value of money declined.

But policy-makers had an answer at hand, even as double-digit interest rates stemmed the collapse of confidence in cash at the start of the '80s.

To stay ahead of inflation, don't beg for a raise. Just borrow the money instead!

Oliver Twist was thus saved the shame of asking for more from his boss, and cutting red-tape in the markets made debt look democratic. By 2007, even the poorest of households could owe a million on housing! Easy money gave easy terms to Western electorates. And so who needed a pay rise  not least after losing their union card  when the bank was only too willing to help? Who needed to risk "second round" pressures when credit was cheap and so freely available?

In straight Dollar terms, the US economy grew by 2.7% per year between 1996 and 2007. To help giddy things up, "broad money (M2) in the US grew by an average annual rate of 7.9% per year," write two European professors in the Financial Times' Fund Management Supplement, "well above the growth rate of nominal gross domestic product."

Here in London, the same story. The British economy grew by two-thirds in the ten years to summer '07; the supply of money more than doubled meantime, while private-sector debt  used to fuel constant expansion in housing and retail  rose faster still. It outpaced growth in the money supply by almost half-a-trillion pounds ($700bn)!

Both Washington and Westminster fell for their own myth, of course. But what we're living through now  or so we guess here at BullionVault  is the end of this seemingly pain-free inflation.

No, not simply the "death of inflation", first reported (à la Mark Twain's obituary) by London economist Roger Bootle more than 12 years ago. And certainly not the end of the "N.I.C.E decade" described by Mervyn King, chief pooh-bah at the Bank of England, in repeated speeches (all of them absurd) from autumn 2003.

"No Inflation, Constant Expansion" was a misnomer to start with, the lie of the first half undone by the scam of the second. Plenty more academics (most of them policy-wonks, too) also stepped up to put a name on that era, variously calling it "The Great Moderation" (Ben Bernanke) or "Great Stability" (Tim Besley, again at the BoE).

Fact was, however, there was nothing "stable" or "moderate" about the 10 years to summer 2007. Joy it may been to live through that phase of history, that final blow-off in the seven-decade bubble of spending and debt that followed the last Great Depression. But "non-inflationary" does not apply  not when you remember that, just like it's evil twin (deflation), inflation in truth refers to a trend in the money supply...a growth in this case, which  if it outpaces production, as the last 10 years so clearly did, winds up in prices. That then requires a deflation to get costs back to even. Unless you play Faustus, repeatedly damned, yet somehow believing that you might yet escape.

"The current weakened state of the economy is such that it could not withstand a body blow like a disorderly bankruptcy in the auto industry," said a White House press secretary after the Senate rejected the "Big Three" bail-out today. "Because Congress failed to act," chips in a Treasury wonk, "we will stand ready to prevent an imminent failure until Congress reconvenes and acts to address the long-term viability of the industry."

Never mind how much it costs. This is just money after all. And there's always more to be printed in a world free of gold. Right up until the cost of the wood-pulp outstrips the value of cash, and money reverts to its base purpose once more.

Scarce resources made vivid by a rare, precious asset.

Formerly City correspondent for The Daily Reckoning in London and head of editorial at the UK's leading financial advisory for private investors, Adrian Ash is the editor of Gold News and head of research at BullionVault  where you can Buy Gold Today vaulted in Zurich on $3 spreads and 0.8% dealing fees.

Please Note: This article is to inform your thinking, not lead it. Only you can decide the best place for your money, and any decision you make will put your money at risk. Information or data included here may have already been overtaken by events  and must be verified elsewhere  should you choose to act on it.