...Put more directly, the current reserves are a fantasy, and the ability of OPEC to actually raise production is greatly constrained...

A few weeks ago we witnessed a political act of such unimaginable stupidity, it is hard to not choke at the mention of it.

A cursory review of the details is worth a minute of your time. This compliments of The Oil & Gas Journal...

WASHINGTON, DC, May 20 -- The US House passed, by a vote of 324 to 84, a bill that would create a new oil antitrust task force within the Department of Justice. Supporters of HR 6074, which also would give DOJ authority to sue foreign oil cartels for violating US antitrust laws, included 103 Republicans, according to its sponsor Rep. Steve Kagen (D-Wis.).

"Until we finally have an energy policy other than drill-and-burn, this bill will begin to set things right for the American people. We cannot drill or grow our way out of this energy crisis. We must begin to think differently in America. That includes loosening the stranglehold other nations have on our economy and exploring new forms of energy," he said following the vote.

The bill, which would amend the Sherman Antitrust Act, also requests a Government Accountability Office study on the effects on competition of prior oil industry mergers and divestitures, he indicated.

"This legislation will address the loopholes and exemptions that oil companies exploit at the great expense of our citizens," Kagen said. "By passing the Gas Price Relief for Consumers Act, the House agrees that it is time to give US authorities the ability to prosecute the anticompetitive conduct committed by international cartels that restricts supply and drives up prices."

Now, unless you were informed upon entering your sixth year of grammar school at the age of 21 that you'd have to stay back another year, you'll recognize this latest bit of pandering as stupidity so profound as to bring a sane man to his knees.

For one, oil is a global market and the members of OPEC include the world's largest suppliers to that market. In a world of increasing demand bumping up against flattening global production, these are not the people one wants to alienate  that is, if we want to drive our cars and tractors and heat our houses with something other than broken bits of heirloom furniture.

Threatening to sue them, or worse, actually suing them, is unlikely to bring a warm response. Can you imagine the oil sheiks being made to present themselves in the docket in a U.S. Court? (If Homeland Security would let them through the airports, that is). Oh, what a fine media circus that would be! Frankly, if subpoenaed, I think they'll just refuse to show. And what then?

Secondly, it also reinforces the fiction that the members of OPEC can actually do something to increase their production, as opposed to just talk about it. It reminds me of Saddam's pledge to unleash the Mother of All Wars against the U.S. Forces... which turned out to be more like the Mother of All Foot Races to the Rear.

The way the OPEC quotas are assigned, the bigger the reserves a member state reports, the more production the member is allowed to sell. Which is why, since the upward reserve adjustments of the late 1980s - made in anticipation of the revision to the OPEC quota system - there have been virtually no reserve declines reported by OPEC members. Its as if a magic oil genie resides under the ground, providing oil in unlimited quantities with a twitch of the nose or a nod of the head over crossed arms.

Put more directly, the current reserves are a fantasy, and the ability of OPEC to actually raise production is greatly constrained. 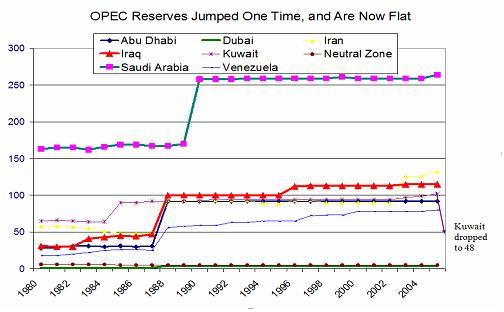 But there is more in this legislation to dislike. Much more. For one, it contains the implicit assumption that all levels of the energy business are corrupt, and the executives of all these firms spend long hours in cigar smoke-filled rooms plotting and scheming to take every advantage of hard-working Americans.

In other words, it declares legal open season on every layer of the energy distribution network. That, of course, means millions of dollars of legal fees, wasted time and, worst of all, more hand-tying regulation... the net result of which will be fewer, not more, energy resources being made available to North American markets.

Do I have a problem with the large energy companies making obscene profits?

Not at all. They are going to need all the money they can muster to replace their declining reserves and to fight off fierce competitors from the rest of the world. Competitors, it must be pointed out, unhindered by the perfect-worlders and political panderers that are now playing so effectively to democracy's weak suit.

Twenty years ago, which was seven years after the link between the U.S. dollar and gold was severed in 1971, oil was selling, on average, for $13.38 per barrel. Adjusting for inflation -- using the Shadow Stats and not the government's laughable CPI -- in today's dollars that same barrel of oil would cost $124.

That it is trading for slightly over that amount, at $133 per bbl, is entirely explainable based on supply/demand constraints, war in the Middle East and the fear of a widening conflict.

In other words, blaming evil-eyed Middle Eastern potentates or bloodless speculators is attributing blame in the wrong direction. If you want to hit the right target, start with the fiat currency system which has systematically reduced the purchasing power of the U.S. dollar and all of its similarly unbacked peers to the level of Monopoly money.

Unfortunately, I don't see any new legislation on the horizon calling the Fed and the Treasury to account for their role in the higher prices now getting so much attention.

David Galland is Managing Director of Casey Research, LLC., publishers of the Casey Energy Speculator, a monthly advisory that identifies undervalued investments in companies that profit by helping to solve global energy challenges. To help you better understand the current fundamentals of energy markets and to provide you with a sample of its research, Casey Research has prepared Understanding Peak Oil and How to Profit from It a FREE 5-part course. Learn more and sign up for the Peak Oil course now, with no obligation or strings attached, click here now.