. . .we have recently taken a good, hard look at several facets of the unfolding crisis. Over the last week, the Casey Research team has continued doing a forensic analysis of where this all might lead, and especially how it will affect our collective investments.

In all our publications, we have recently taken a good, hard look at several facets of the unfolding crisis.

Over the last week, the Casey Research team has continued doing a forensic analysis of where this all might lead, and especially how it will affect our collective investments.

In a minute, Ill share a summary of our current thinking, but first want to stress that, given the scope and the complexity of the situation, divining the future from this point on is no easy task.

Doug Casey has often said the crisis could be deflationary or inflationary, he wasnt sure which, but he was pretty sure about the crisis part. Now that it is up close and personal, we are beginning to get a better sense of the nature of the beast and can make strategic adjustments to our outlook, and our portfolios.

After reviewing reams of data and engaging in long and intense dialogue, here is the briefest of summaries as to our current position.

Global stock and bond markets are in for some very bad days. Unfortunately, when it comes to a rush for liquidity, investors will sell anything they can get a bid on. That means even the assets that shouldnt be sold  precious metals and stocks, for instance.

1. The weakness in gold in recent weeks, modest by contrast to other sectors, is not due to a sudden breakdown in its historic role as a store of value in periods of crisis. Rather, it is because of the fact that it can be liquidated quickly and easily.

2. The stocks of the larger gold producers, which have already taken a hit on deflationary fears, remain at near-term risk. If you own them, you have two choices: hold through whats next, or take advantage of their liquidity to step aside for a while. (More on that in a minute).

3. We are happy we recommended lightening up on the stocks of our greatly appreciated junior base metals companies ahead of the recent crisis. Now our attention turns to the junior precious metals stocks. On that front, we are going to be increasingly focused on those with the best management teams, cash in the bank and which are clearly on to a significant deposit.

Which raises the question of whether one should try to sell any junior gold share at this point? Especially considering that many are already off sharply, and volume for most stocks has largely dried up.

Answering requires stepping back for a further look at the big picture.

There has been a lot of talk about the current credit crisis being deflationary, and that will be bad for gold. We have looked hard at this issue and come to a couple of conclusions.

 Up until this point, the Fed has remained focused on fighting inflation. With the clear and present danger of a deflation now sweeping the globe, the Fed can, and soon will, shift its focus to heading off a recession or worse. How might they do that? Ah, now we recall the words of Fed Chairman Bernanke when he said that, should the occasion warrant it, he would not hesitate to drop dollar bills from a helicopter.

 When will the engines of those helicopters fire up? The engines are warming up now. We say that because nothing the Fed and other central banks have done to date will have anything more than a transient effect on this crisis. It is just a matter of days, and maybe even hours, before the next delivery of bad news arrives: CODs and the stock markets move again into crash mode. Only, next time, the fear that the Fed will be ineffective will likely send the markets down harder and faster than anything weve witnessed yet.

And once the dollars start flying, therell be no stopping them.

But what of the U.S. dollar? After all, once the printing presses fire up to full speed, and the Fed Funds rate begins to ratchet steadily downward, wont the Chinese and other non-U.S. holders of our 6 trillion dollars show their displeasure by ridding themselves of the things, driving the dollar down even further? Surely that cant be allowed. Can it?

In a call with long-time friend Clyde Harrison, one of the most seasoned and sharpest players on the commodities scene (he invented the Rogers International Commodities Index Fund), he quipped to the effect of, "Were in an election cycle and the foreign holders of U.S. dollars dont vote. By contrast, the U.S. voting public is up to its neck in debt. When push comes to shove, the dollar will be sacrificed."

We think he is right. And I would add one more observation. The only shred of fabric remaining somewhat intact in George Bushs tattered legacy is the relative strength of the economy over his term. To now have the economy go down in flames on his watch is unacceptable to him and, more important, his political cronies. What moves are left to them at this point other than ramping up the money engines? None at all.

Oh, and choosing the path of inflation offers one more tangible benefit. The effect of a massive ramp-up in the supply of money, enough perhaps, to rescue the hundreds of billions otherwise destined for money heaven, is that the inevitable consequence -- higher prices -- wont be fully felt until after the upcoming presidential elections. In other words, it wont be crisis diverted, but rather crisis delayed.

There is a fly in the ointment, however. This particular fly wont sit passively while its wealth is destroyed. I refer, of course, to the aforementioned foreign dollar holders. Looking under the hood as he is wont to do, our chief economist Bud Conrad has already found signs that they are starting to edge back from the weekly Treasury auction. 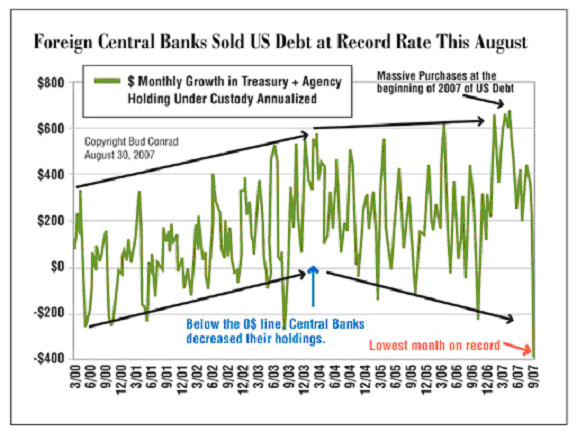 What this means to us is that while there is a real risk that the shares of our favorite companies  and possibly even gold itself -- will come under pressure with a general stock market crash, we dont expect the pressure on gold to last long not in the face of the tsunami of money that is going to look for a new and safe home.

And central banks? Wont they try to keep gold down on the farm? After all, if it starts to take off, as we continue to feel is inevitable, wont that risk expose the fact that the emperors clothes are made of paper that fall to pieces in the first moderately heavy rain?

Yes. And so we will expect to see more announcements of central bank sales. But the impact this trick has on the price of gold will be diluted with each new announcement. In time, announcements of further sales will be met with cries of legitimate outrage by citizens concerned their central bankers are trading away their only tangible holdings. The dollar is headed toward the sacrificial altar, with a knife made of gold. Sooner or later, the central bankers will have to throw in the towel and just let gold run.

These are not ordinary times and the outcome likely wont be ordinary either. Good or bad. Assuming that the best case takes care of itself, we will mostly focus on the worst case.

David Galland is Managing Director of Casey Research, LLC., publishers of Doug Casey's International Speculator, a monthly newsletter focused on identifying high quality natural resource stocks with the potential for a double or better over the next 12 months. A 3-month risk-free trial to the letter is available for interested investors.

[Editors Note: The September edition of the International Speculator features an in-depth discussion on how to prepare yourself for the unfolding crisis, takes a look under the hood at risky money market funds and much, much more. If you are not yet a subscriber, sign up today for a risk-free trial. Click for details.]